Back of Bleaklow in the sunshine 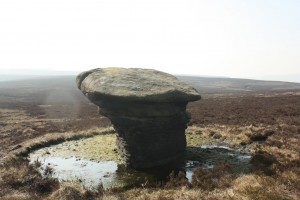 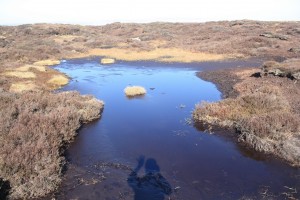 28.03.12
Walking with; Nobody
A tough but beautiful day climbing up from the Woodhead Pass and with the sun beating down and tremendous views. As soon as I got out of the car and crossed the bridge over the River Etherow I saw a Dipper bobbing up and down on a small rock by the far bank and the wildlife was a constant over the whole walk. This is Grouse shooting country and the moorland in this area has been very much shaped by the demands of the shoot. The path up Far Black Clough is a cracker, it winds it’s way up the very narrow clough, dipping in and out of the sunshine and ascending steadily, eventually it becomes a little too narrow and steep and a tiring scramble up the bank to the rough Landrover track used by the shooters is necessary. I followed a narrow path along the clough edge before following a large, sandy grough Eastward onto the path from Howden Edge. I followed this path for about half a mile putting up quite a few Red Grouse and a number of Mountain Hares in various shades of colour from pure white to dirty brown. Visibility was excellent so I could see my goal, Barrow Stones, and struck off across the moors to reach them, negotiating a few deep groughs and peat bogs before arriving at the stones for an early lunch and a bit of shade from the strong sun. I’d not seen another soul and the only sign of human activity thus far had been a helicopter which looked like it was distributing fertiliser or feed over the moors.
Refreshed by a chicken sandwich I headed across to the Grinah stones where I met a landscape photographer who was taking advantage of the fantastic weather and spectacular views over Ridgewalk Moor and over the River Westend. The rocks are eroded into fantastic shapes and the vista was amazing. I spotted a Common Lizard catching a few rays as well before leaving the stones and heading through some waist high heather South East towards Round Hill. In spite of the weather it was still pretty boggy underfoot and at one stage I found myself thigh deep in peat bog, this is not a walk I’d fancy in mid-January! After a while I met a deep landrover track linking the Ronksley Moor bothy with the Grouse butts. I wandered down to a viewpoint over the River Westend before returning along the path and down to the beautifully sighted bothy at the top of Lower Small Clough. It’s pretty basic and is, I think, mainly used for shooters, but there is a poem tacked to the wall singing the praises of the shelter provided on a wild, snowy afternoon!
Lower Small Clough runs down across the heather (including a patch very recently burned) and past many well established Grouse butts to a beautiful spot where the clough meets the River Derwent, where I cooled down by sticking my head into the running waters! (Bliss!)
The path along the Derwent is beautiful and the landscape a little more lush than on the tops, but I soon had to leave the river and ascend the steep, brackeny slopes of Hoar Clough to the Shepherds Meeting Stones. Featherbed Moss is a pretty featureless expanse and it took me a while to locate the path that led back to the Howden Edge path, but locate it I eventually did and followed it due West until cutting off back to Far Black Clough where I followed the path all the way back to my car, sweaty, peaty but thoroughly satisfied by a great day.
One of the real highlights of today was the solitude. The number of other walkers I saw today can eb counted on the fingers of one hand, once I’d got away from the A628, there were no roads, houses, pylons etc and the tracks and butts were well hidden. It is remarkable to get a feeling of such wilderness and isolation so close to Manchester, Barnsley and Sheffield, and there is something magnificent about the utter bleakness of the expanses of moorland!
To see the full album for this walk please click on the link below;
https://www.facebook.com/media/set/?id=718985691&tid=136991043086476&frecId=false&skipClustering=true&qn=1333017097&success=1&failure=0&set=oa.183955508390029

One thought on “Back of Bleaklow in the sunshine”