A night walk and a day walk from Borrowdale YHA 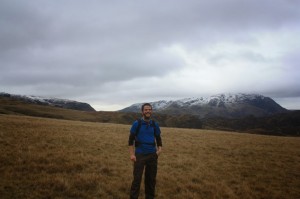 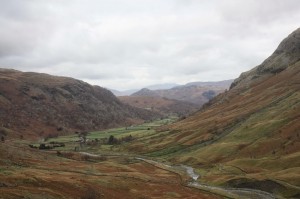 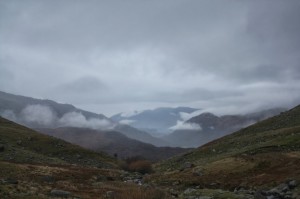 I only ever seem to visit Borrowdale in the cold. Last year I had one of my best, if snowiest walks, there http://www.comewalkwithmeuk.co.uk/2012/12/borrowdaleand-snow.html and when I arrived this weekend, full of fish and chips from “The Old Keswickian” I could see a dusting of snow across some of the higher tops. I had decided that the time had come to bite the bullet and set out on some night navs on my own, it is hard to finding people who are brave/daft/amenable enough to come out stumbling around the Peaks or the Lakes in the dark, and yet, it is one of the key challenges I will face on my ML assessment, so I gave it a go! I left the hostel and meandered through the Autumnal woodland following the crystal clear waters of the river I’d decided to make my way up to the fells, wait for darkness to fall and then micro-nav my way down from point to point. It seemed a little counter intuitive to be heading out as most people were heading back to the twinkling lights of Borrowdale, but it also seemed adventurous. As darkness fell I took a deep breath and reminded myself that I didn’t believe in “ghosties or ghoulies or long legged beasties or things that go bump in the night” and set off using as many different techniques as I could usefully remember.
I’d given myself the fairly unmissable “handrail” of the stream so bumped up and down the slope from point to point, trying to identify ring contours and near invisible re-entrants, seeing the beam of my Petzl reflected in the eyes of the local Herdwicks and, at one stage, seeing another fellow night wanderer somewhere on the slopes of Thorneythwaite Crag! It wasn’t the toughest route, but it was a start and as I wandered back along the abandoned lanes to Longthwaite I felt a, probably disproportionate, sense of pride and felt the three pints of “Cumberland” at the hostel bar, better earned than on many previous occasions.
I was joined by Rob the next morning. Once a colleague at Lose Hill YHA, the lucky sod has moved to the Lakes and now lives down in Levens. We set off along the river bank before aiming up and steadily ascending the Honister pass until we reached the slate mines and Honister Hause hostel. Circumventing my “Face of Fatigue” hell http://www.comewalkwithmeuk.co.uk/2012/12/borrowdaleand-snow.html , we headed up the steady ascent along the side of the fell which opened up some spectacular views over Buttermere and Crummock Water. It was chilly on the tops and as we made our way up the slopes of Green Gable I found myself walking in snow for the first time this Winter. The cloud dropped lower and lower and by the time we reached the summit we were restricted to a view of little more than one another! We headed down to Windy Gap and then slipped and scree slithered our way down to Styhead Tarn, one of my favourite spots in the whole Lake District. The path from here was a straightforward descent and then a stroll along the valley floor to Seathwaite and eventually back to Borrowdale. It was great to catch up with Rob again and, as a fell runner, he enjoyed the more sedate pace that I explore the fells at. Looking forward to some more snowy days out in the Lakes in the not too distant future!