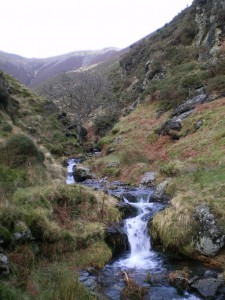 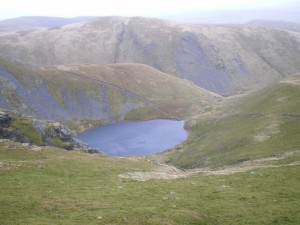 18.1.12
Walking with; Al
My last walk before the knee operation so wanted to make it a good one, and where better than The Lake District. At 868m, Blencathra is a top 20 Lakes Peak, but as far as the Northern Fells go it is second only to Skiddaw and affords magnificent views in all directions. For many years Blencathra was known as Saddleback due to the shape of the summit which comprises of six separate fell tops, however that doyenne of the Fells, Alfred Wainwright, repopularised the ancient name which is believed to derive from old Cumbrian words for a “bare hill” and “shaped like a chair”…….The classic route includes the ascent to Atkinson Pike via the hair-raising Sharp Edge but with plenty of snow and ice still on the ground we decided to make the ascent via the beautiful Scales Tarn.
The path climbs across the hillside behind The White Horse Inn, woodsmoke curling appealingly from the chimney this morning. It was damp underfoot and the wind had teeth, but we gained height quickly and the path curled round til it followed the Glenderamackin River to Scales Beck. We climbed up to the Tarn, the perfect place for a spot of contemplation alongside a coffee and museli bar to fuel the haul up to the summit. Sharp Ridge was beautifully picked out against the clouds and the snow on the tops was clearly visible now. Scales is a fantastic example of a glacial tarn and the name means “The Tarn by the Shepherd’s Hut”, although there are no signs of a hut there nowadays. Martineau wrote about it in his 1855 “Complete Guide to the English Lakes”
“Here, too, lies another wonder- that tarn (Scales Tarn)
which is said to reflect the stars at noonday – a marvel which
we by no means undertake to avouch. The tarn is so situated at the foot of a
vast precipice, and so buried among crags, that the sun never reaches it, except
through a crevice in early morning.”
The climb to the top was tough but the views back to the tarn were fantastic and as we circumvented the patches of snow to reach the official summit at Hallsfell Top the sense of satisfaction was very real. Ahead of us lay Derwentwater and Keswick and the saddle leading to Blease Fell where we’d planned to descend. We could also see Thirlmere, Skiddaw and the Old Man of Coniston to name but a few. We’d planned to have lunch on the top but the wind was so severe that we battled our way along the saddle to Blease Fell before starting to descend. Even heading down it didn’t ease off much, but we eventually found a ledge of rock above a ditch and sheltered in there for a hasty sandwich with a view of Thirlmere. The descent continued towards the valley floor before running for around a mile and a half back along the lower slopes with the occasional scramble or beck to traverse to our starting point at Scales.
To view the full photo album for this walk please follow the link below
https://www.facebook.com/#!/media/set/?set=oa.137670526351861&type=1