Mud, mud, not so glorious mud round Alderley Edge 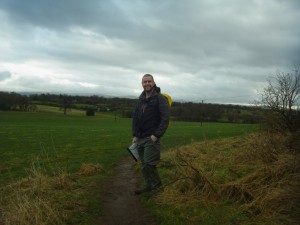 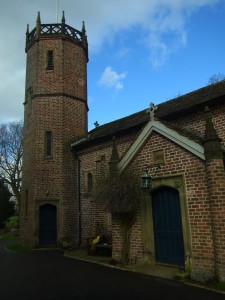 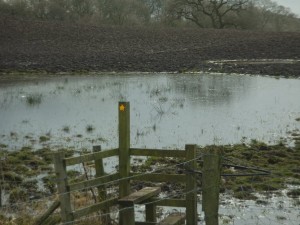 07.03.12
Walking with; Nobody
Alderley Edge is famous for the “Cheshire Set” and being home to various multi-millionaires and Premiership football stars. It also has a magical reputation with myths and tales linked to wizadry and the Arthurian legends (http://mythsandlegendsofcheshire.blogspot.com/2008/10/wizard-of-alderley-edge.html) and nowadays is home to the Jodrell Bank Centre for Astrophysics whose enormous radiotelescope dominates the view for many miles. I’d hoped to see a more pastoral, rural side of the area and had borrowed a walk from a guide book written in 1985 by Graham Beech which promised a lot. In the end it proved to be a little bit challenging!
Having parked next to “The Wizard” pub I headed off straight into the rolling farmland of Cheshire and away from the Edge itself. The path led through fields full of wildlife and in the space of the first half an hour I’d seen a circling Buzzard, a flock of Chaffinch, a pair of Red-Legged Partridges and a number of pheasant. A little further on in the walk I came across a couple of woodland areas set up for breeding pheasant for shooting and it was a reminder of why the Cheshire Game Fayre is such a popular event!
After following a bridleway, I cut across a couple of fields between Jarman’s and High Park Farm putting up a flock of Lapwing before being confronted by something that looked like a battlefield from the First World War. The fields that the footpath cut across had been used for over-wintering cattle and the whole area had been trashed. The fields were a quagmire and the pathways were reduced to rutted, muddy, partially flooded ditches. What remained of the paths were edged with barbed wire and electric fences and there was a distinct “Walkers not welcome feel” to the whole area. None-the-less with full confidence in my excellent boots and the delicate balancing skills of a tightrope artist I pressed on! The paths grew worse and worse and the only consolations for what was now becoming a slog was the flock of twenty odd Teal put up from a flood in a field and a few more Partridges. Insult was added to injury when I reached an electric fence across a marked pathway en route. Whilst I appreciate how tough farming can be and also how injudicious and inconsiderate walkers can cause damage to farmland the balance here appeared to me, to be all wrong. I eventually re-negotiated my route and made my way over to my original goal of St. Catherine’s at Over Alderley where I had my lunch. The church, a Grade 2 listed building, was originally the private chapel of the Hibberts at Birtles Hall and has a distinctive octagonal tower and 16th and 17th Century stained glass. Unfortunately and in keeping with my luck today, the church was locked!!
I decided to head back at this stage, beaten by circumstance, however my spirits were further lifted on the way back through the woods when a young fox jogged across my path in front of me.
Today has left me frustrated. The paths today were essentially unusable due to agricultural activities and there seemed to be no effort made to lessen the impact on the footpaths. Elsewhere in the fields there were area demarcated that seemed less destroyed and I am left to wonder if there is an implicit hostility to the walker which has manifested itself in this way.

2 thoughts on “Mud, mud, not so glorious mud round Alderley Edge”