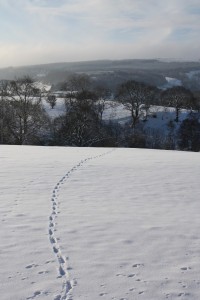 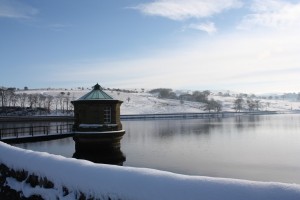 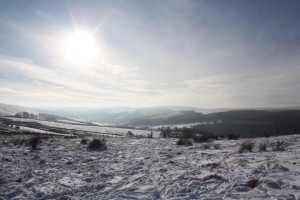 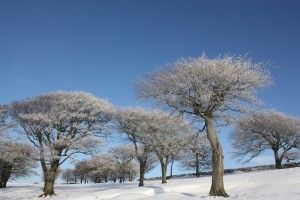 Snow seems to divide the nation, one half turning into big kids and the other into whingers and moaners, perhaps the divide is based on whether you have to go to work in it, because spending a day wandering through the Peak District in the snow is, quite frankly, one of the best things I can think of doing! It’s a while since I have found a completely new walk in the Peaks so I pulled my well thumbed “Pub Walks in the Peak District”  out of the bookcase and on John Morrison’s advice decided to try a variant on his stroll around Fernilee.
Fernilee is a hamlet, a mile or so South of Whalley Bridge and consists of “The Shady Oak” pub, a few farms and not a lot more. However a short stroll down the Goyt Valley there are the twin reservoirs of Fernilee and Errwood built in 1938 by the Stockport Water Corporation. I followed the footpath through Folds Lane Farm and down the pristine slopes to the River Goyt itself which I crossed before following a path that seemed better suited to cross country skiing than walking to the head of the Fernilee Reservoir.  Walking with the crunch of snow under boot, the sky blue and cloudless and a chill wind reddening your cheeks is hard to beat and my meander was further cheered by a friendly Robin accompanying me en route……no bird looks better against a backdrop of snow and holly. The next section took me through a fir plantation giving the walk a distinctly Scandanavian flavour before a path dropped down to the shore and I followed this to the dam separating the two reservoirs. It was being utilised by some kamikaze sledders who I watched in awe before lunching on top of the dam and spending ten minutes chatting to a gent who’d come down from the Cat and Fiddle.
I circumvented Bunsal Cob before taking the Midshires Way and heading through some seriously deep, drifted snow to the roadside viewpoint of Long Hill with views back towards the reservoir and across to Ladbitch Wood and Taxal Moor. The slog across the thigh deep drifts made me feel like Titus Oates, except with a little less immediate peril. Crossing the access land North of the A5004 I headed through more deep snow up to the Old Road which led me past the very lonely and remote farm at Wythen Lache and back through a true Winter wonderland to the lane down to the pub which sadly had just closed thus depriving me of a well needed pint and opportunity to thaw out in front of a fire……ah well, there’s always next time!
All this snow has seriously whetted my appetite for our ski trip, one month from today, so fingers crossed it continues in this vein!