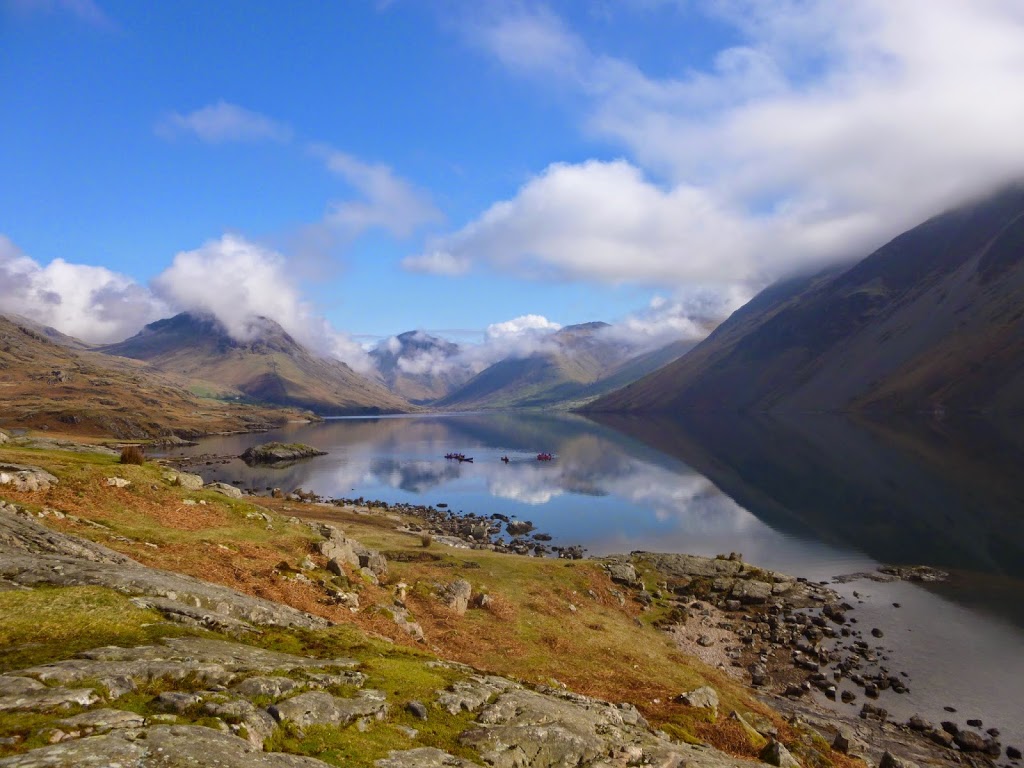 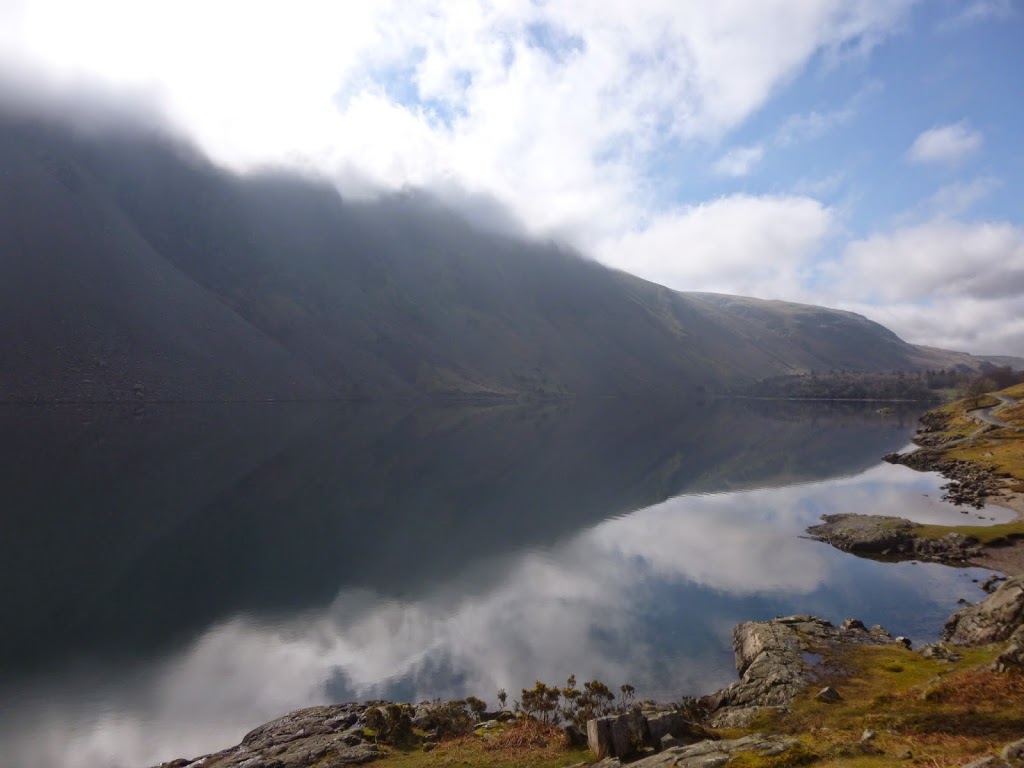 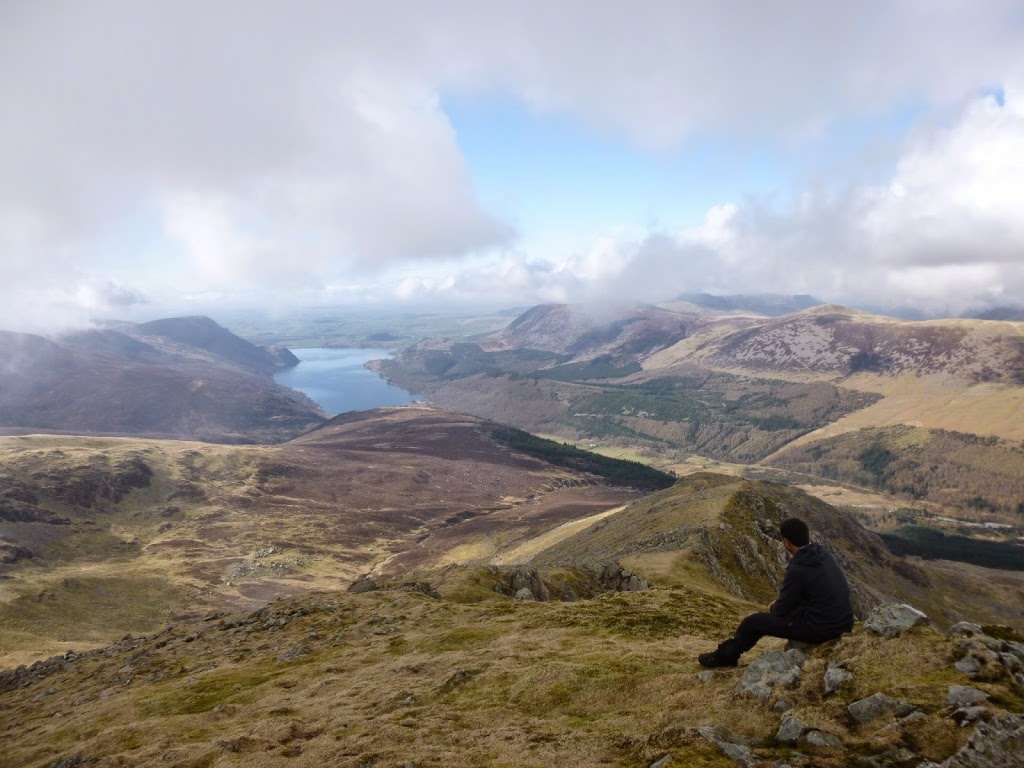 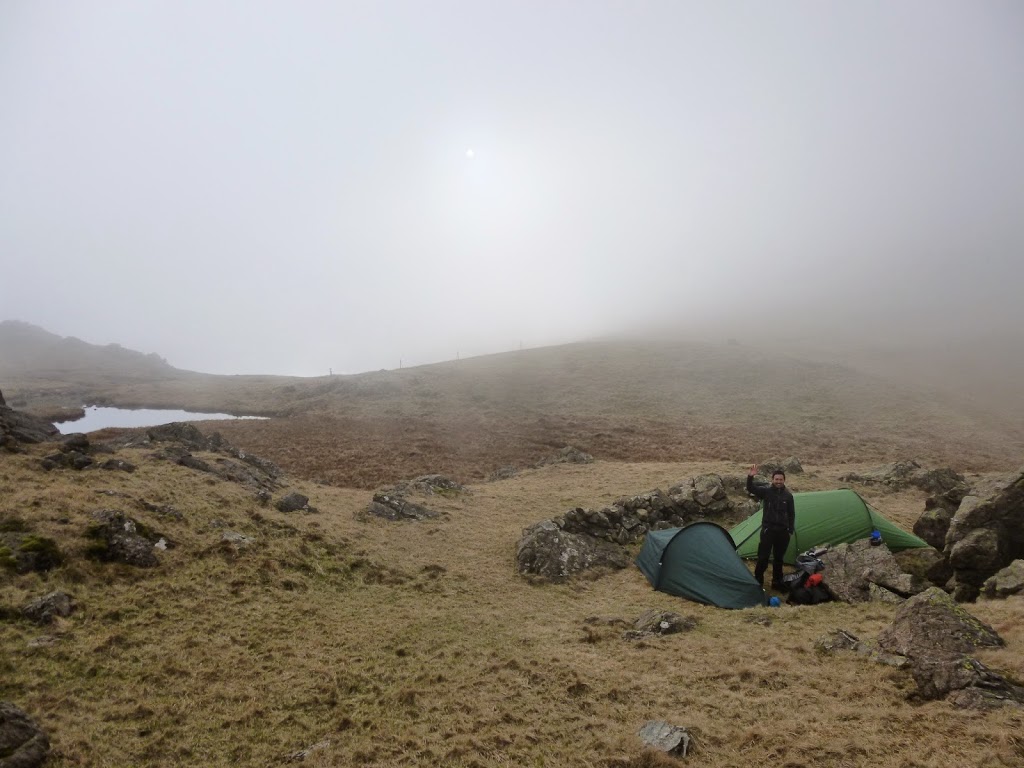 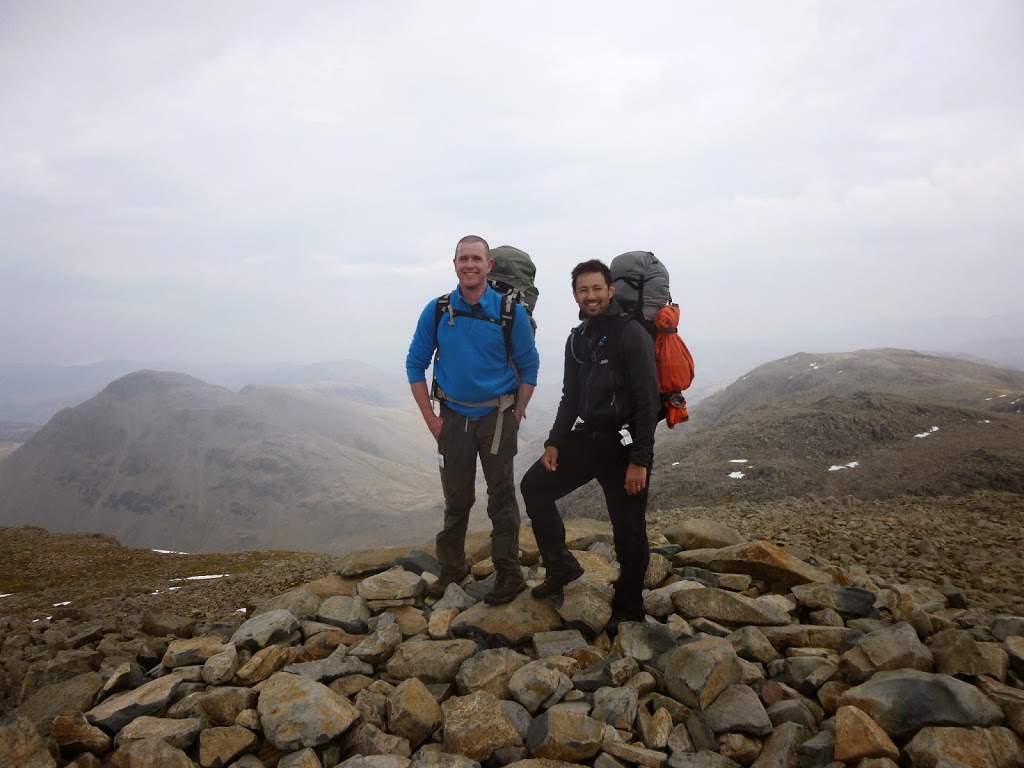 Choosing my favourite Lakeland valley is a little bit like being asked to name the best player in the Welsh rugby team of the 70s or the best pub in Manchester, there are many, many viable options in the frame. However, just as the names of JPR and “The Briton’s Protection” end up coming to the fore more times than any other contender can manage, Wasdale is their Lake District equivalent. Ennerdale, Eskdale and Borrowdale all have their qualities and charms but in Wasdale you feel you are properly in real mountain country. It has the deepest lake and highest peak in England, it has “The Wasdale Head Inn” beloved of generations of climbers, the view of the lake from Scafell Pike was voted Britain’s favourite and it is home to Joss Naylor, the greatest ever fell runner, it is a land worthy of the superlatives!
Al and I parked up on the shores of Wastwater and after shouldering overnight packs (a bit of a shock to the system) headed off up Greendale Gill in distinctly un-Lakeland like sunshine. Greendale Tarn is beautifully situated between Seatallan and Middle Fell and after a quick lunch stop it was onwards in the direction of Haycock. The cloud level was low, but there was little breeze and the views down Nether Beck were sublime. The summit of Haycock was attained after a short, rocky scramble and it was on to Scoat Fell masked in cloud. Luckily, the cloud lifted and there stood the magnificent ridge of Steeple jutting out toward the re-wilding Ennerdale, another runner in the race for best valley. Wainwright said of Steeple, “Seen on a map, it commands the eye and quickens the pulse, seen in reality it does the same“ and he is right! It’s a short scramble along the ridgeline to reach the summit and it’s expansive views over Ennerdale are well worth the detour. From Steeple it was on to Pillar, the eighth highest peak in the Lakes, and a huge, broad summit topped with a wind shelter and number of cairns. The descent from Pillar is hard on the knees and by the time we reached the Black Sail Pass the packs were feeling heavy and our bellies growling, so we decided to set up camp for the night just above the second of the two small tarns in a perfectly sheltered spot. There was barely a breath of wind and the clouds were rolling over the hills into Ennerdale as we sat and cooked up our tea. It was a clear night and under a starry sky I did a little night nav whilst Al enjoyed the utter peace and solitude of this fantastic camp spot.
A cuppa and porridge pot watching the sunrise….not a bad way to start the day, and then we were away to Kirk Fell. The scramble up Kirkfell Crags is a decent challenge with full pack but it wasn’t long before we were crossing the expansive plateau towards the summit with views of the Scafell massif and Wastwater far below. Great Gable came next, a genuine contender for the best mountain in the Lakes and squeaking in at a disappointingly specific 899m! The climb up was not as gruelling as I remembered and it wasn’t too long before we were stood before the Fell and Rock Climbing Club memorial plaque, there were still plenty of poppies and crosses remembering the fallen. Last time I’d been up there I’d ended up descending the screes in a state of exhilarated terror but this time we took the steep, but less terrifying route down to Styhead. Styhead is the Spaghetti Junction of this part of the world and as we approached we saw our first other walkers of the day, coming from all directions, we were amongst those carrying on to “The Corridor Route”. Having only ascended Scafell Pike from Wasdale before this was a pleasantly walker free route with Wasdale Head sitting far below and the awesome slash of Piers Gill cutting through the rock beneath Lingmell. Ravens circled overhead as we hit Lingmell Coll and slogged up the last ascent to temporarily be the highest people in the whole of England. Scafell Pike often disappoints in terms of views due to cloud and rain but the views today were some of the best I’ve seen from this particular summit. As the highest peak in the country it is rarely quiet on the summit and it’s less than pretty top is also rarely litter free. It’s perplexing that anyone willing to expend the energy to climb to the top is unwilling to expend the additional energy to carry their crap off the top with them. It’s hardly an original rant, but no less heartfelt for all that. We dropped down to Mickledore and from there descended the scree slope down to Hollow Stones before following the well trodden path down Brown Tongue to the lake and then on alongside the forboding body of water to our cars and a welcome rest.
Al had to head home but I fancied a wee bit more navigation practice so headed over to the excellent Grasmere YHA for a well earned kip. I left the hostel the next morning and made my way up towards the lumpy, bumpy land between Brigstone and Blindtarn Mosses! It’s a great area for navigation and I wrestled with my 1:50,000, which I still find a tougher scale to work with, but eventually had some success finding my way around the area and enjoyed the views from Lang How down towards Langdale. The path that skirts the summit took me round to Silver How and after a final view down towards Grasmere and Rydal it was back to the hostel and home after a cracking couple of days of Lakeland exploration.

8 thoughts on “A Wasdale Wild camp”