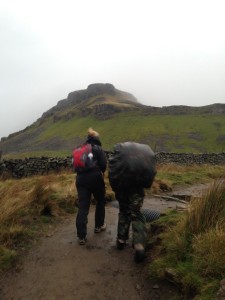 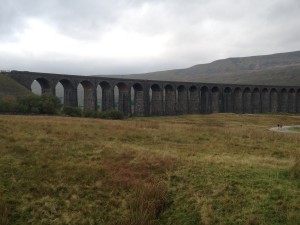 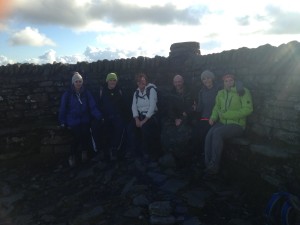 The Yorkshire 3 Peaks is one of the UK’s classic “challenge walks” and is deservedly popular. It takes in three of Yorkshire’s highest peaks, Pen-Y-Ghent, Whernside and Ingleborough and covers around 25 miles, not an undertaking to be taken lightly. Whilst the route can be started from a number of points and done in either direction, myself, Alex and eleven eager (if slightly nervous) clients set off from the traditional starting point of Horton-in-Ribblesdale at 6.45 in distinctly inclement weather.

The route led us to Brackenbottom and then started the slow, steady ascent towards the hill itself. Although it was early and the forecast poor there were already plenty of “challengers” on the route, but with the cloud low we didn’t see the summit until we reached The Pennine Way and turned to start the rocky scramble towards the top. At 694m this was the lowest peak of the day but the top was wreathed in cloud and the rain was being whipped in by a vicious wind so we didn’t stay long and carried on along the Pennine Way and down towards Hunt Pot. The original route used to run across Horton Moor but due to heavy erosion a new footpath has been routed across Whitber Hill rejoining The Pennine Way near Jackdaw Hill. It was a long plod on easy terrain but the group were eating up the miles and spirits were high as we passed the slightly spooky Ingman Lodge and then followed the Gauber Road along to Ribblehead where our support vehicle was waiting with very welcome tea and biscuits.

Ahead of us stretched the magnificent Ribblehead viaduct. The viaduct was built between 1870 and 1874 and is 400 metres long rising to 32 metres above the valley floor at it’s highest point, it truly is a spectacle worth the mileage. Around 100 navvies died during the construction and many of these men are buried in the churchyard at Chapel-le-Dale. Refreshed we followed the path that ran alongside the railway line and then turned to climb the long, gradual ascent to Whernside via Grain Ings. As we climbed, for the first time that day, patches of blue sky began to appear above the summit which at 736m is North Yorkshire’s highest peak. The views from the top across into Cumbria and back to Pen-Y-Ghent were well worth every ounce of blood and sweat shed along the route thus far. At the top four of the ladies in our group decided that they weren’t going to attempt the third peak of Ingleborough which sat ahead of us moving in and out of the clouds, but the rest of the group remained up for the final challenge in spite of two hail showers on the slippery descent.

We left the four ladies in the capable hands of our support team and refuelled by tea and Cherry Bakewells continued on across the stunning limestone pavement of Highwood Pasture and through Humphrey Bottom to the foot of the short but very steep final ascent onto Ingleborough. It seemed cruel to have to negotiate such a steep slope with so many miles in the legs but we all huffed and puffed our way to the top before traversing the stony plateau of Ingleborough to the trig and wind shelter, three peaks done! The last five miles seemed to stretch out forever as we descended Simon Fell Breast and continued through more spectacular pavements and the boggy ground of Sulber Nick. Our arrival in Horton coincided with a steam train racing through the station, a slightly surreal end to a challenging day, but one of which all the group members can be incredibly proud they completed. It was a pleasure to have been part of the experience and to help Mountain Monkeys and their enthusiastic and determined group achieve their goals!