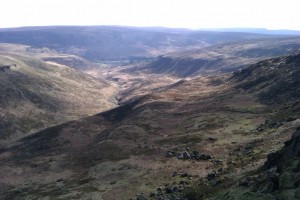 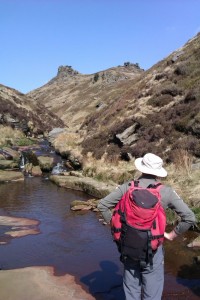 01.04.2012
Walking with; Cath and Brian from the Rangers
Another stunning day out in the Dark Peak on my third pre-visit with the Ranger service, one more and I’ll be eligible for an interview for the training scheme. The Langdendale Ranger Station is based in Tintwistle and sits above the Bottoms Reservoir, one of five that run up the valley and which were used by the Luftwaffe in World War Two to help guide their bombers into Manchester. We were heading out onto Crowden today under blue skies and I was looking forward to my first excursion on this classic peak and the chance to get some views back over to Bleaklow where I’d been on Wednesday.
Leaving the campsite and YHA behind we began by following the Crowden Great Brook. Initially a path runs along the brook but soon the path disappears and it became an exercise in scrambling and carefully picking our way along the banks. Cath told me that they do get Peregrines nesting in the valley, but in spite of seeing evidence of a couple of kills, we didn’t see anything bigger than a Kestrel in the air or a Weasel on the ground! After scrambling up a couple of waterfalls, the rock formations known as the Castles came into view and we headed away from the river and up the very steep, calf tightening climb to our lunch spot. It was breezy on the tops but the views as far as Kinder made the climb worthwhile and we were able to watch a few people picking their way along the “new” Pennine Way. Refuelled we struck out North East onto Siddens where we came across evidence of yet another plane wreck on the top, there are over 200 wrecks spread across the Peak District and whilst the majority date from World War Two, the most recent was in 2008! There were great views across to Black Hill, but we had a path survey to complete and so had to save it for another day. We headed west from Siddens over some rough moorland before dropping down to The Pennine Way at Red Ratcher. The path climbed steadily out of the valley and cut across the hill on the opposite side of the brook we’d ascended in the morning. Once we reached Laddow Rocks we dropped down off the path to the “cave”, an overhanging bivvy spot closely linked to the foundation of The Rucksack Club and latterly the Mountain Rescue Teams. The Rucksack Club was founded in 1902 “To facilitate walking tours and mountaineering expeditions, both in the British Isles and elsewhere, and to particularly to initiate members into the science of rock climbing and snowcraft”, Laddow Rocks was one of the favourite sites for the early members to climb on, but difficulties in rescuing an injured participant led to the formation of the “Stretcher sub-committee” which eventually led to the formation of the Mountain Rescue teams.
http://www.original.rucksackclub.org/index.php. There were a couple of climbers but we left them and continued along The Pennine Way which was surprisingly quiet given the conditions. We crossed Oakenclough Brook and headed down with the Reservoirs in our sights all the way back down to the campsite and a welcome sit down for a brew!
To view the full album please click on the link below:
https://www.facebook.com/video/video.php?v=10150773778335692&oid=136991043086476&saved#!/media/set/?set=oa.186799064772340&type=1