Wet and wild walks from Llanberis 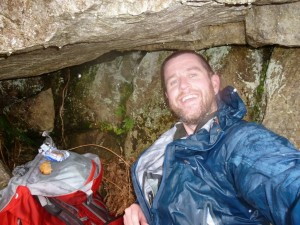 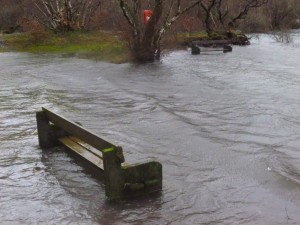 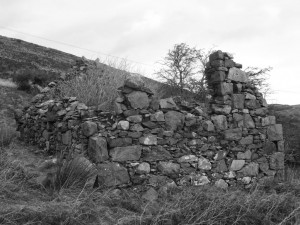 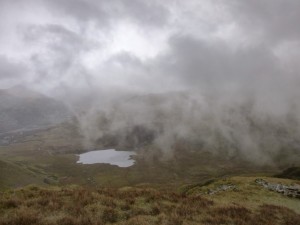 The good folks at the MWIS http://www.mwis.org.uk/ had provided the following information for Snowdonia, “ frequent snow and hail with thunder, occasional whiteout conditions” but my cosy bunk at the Llanberis YHA was already booked and I had a new pair of Berghaus waterproofs to put to the test! On the drive over it became clear that we were in for some pretty serious weather and it was almost at the stage where I considered retreating to “Pete’s Eats”, settling next to the radiator and working my way through the largest of large brunches! However I summoned up some serious resolve, parked at the end of the tiny hamlet of Cwm-y-Glo and set off to take on Mother Nature in the foulest of moods. I followed the path from the small carpark at the end of the village and climbed up to Gallt-y-celyn. It was slippery underfoot, brutally windy and the rain was flying in horizontally, but there were still views down towards Llyn Padarn and Snowdon sat magnificent in the distance. I headed across to the slopes of Garreg Lefain where I found myself a sheltered spot above the reservoir for a spot of lunch and some respite from the torrential rain. After twenty minutes of questioning my sanity I devised a roundabout escape plan that would incorporate a little wet weather nav practice with a reasonably rapid descent off the hill. In the end it was one of those days that tested me, there were times when it was a little unpleasant but as I sat in “Pete’s Eats” an hour or so later with a pint of coffee and a bacon and egg roll the words of my t-shirt rang true, “Better a rainy day on the hill than a sunny one in the office”!
Thursday’s forecast was worse yet but as I left the hostel and started the gentle climb through farmland and past many abandoned and ruined cottages and barns, the sky was still blueish. I hit the North Wales Pilgrims Way above the old slate workings and turned up onto Bryn Mawr and the lower slopes of Moel Eilio, my goal for the day. I could see the clouds rolling in over Snowdon and even more ominously the ribbons of cloud trailing in from the coast, as I hit the summit the hail swept in with stinging force. I ducked into the summit shelter and identified the ridge walk on to Foel Goch which looked straightforward even with the increasingly poor visibility. I made it as far as Foel Gron when the storm hit, the thunder was directly overhead and deafening and the lightning appeared like a flashbulb going off seemingly right in front of my eyes. Abandoning my original plan I decided to get off the ridge as soon as possible and managed to find a reasonably secure (though still extremely blowy) way down to Llyn Dwythwch. By now the snow was falling pretty heavily but I found the ruins of a sheepfold and tucked myself away for some lunch whilst the flakes settled all around me. Shaking off the cold I skirted the lake and made my way back to the hostel. It was too early to go back so I headed over to the old slate mines for a bit of a nosey before the rain forced a retreat once more back to Pete’s welcoming embrace!

2 thoughts on “Wet and wild walks from Llanberis”