Snowdon via the Ranger Path with School Camps 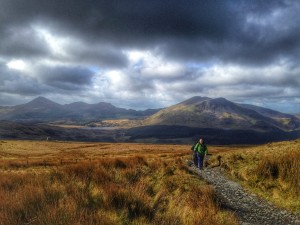 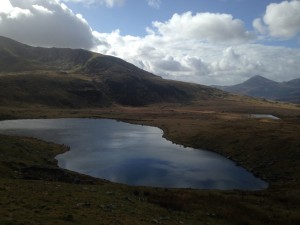 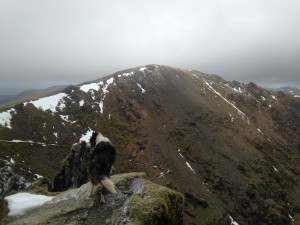 I’ve probably climbed Snowdon more times than any other British hill or mountain (with the possible exception of Kinder) but I had never used the Ranger Path before. It’s considered to be the oldest of the main routes to the summit and was named after an English mountain guide called John Morton who styled himself as the “Snowdon Ranger”. He was also responsible for building an inn at the foot of the path on the site where the Snowdon Ranger YHA now stands. The School Camps team I was leading for consisted of young people who were preparing/fundraising for overseas expeditions with Camps International and various parents and grandparents who were along for support and exercise! The weather forecast for the day had been pretty horrendous but it ended up being a pretty spectacular day albeit in the teeth of some very chilly winds!
We set off from the campsite at the head of Llyn Cwellyn and through the wet, boggy farmland fringing the steam railway line. The climb steepened and we split into two groups, making our way below the ridge of Moel Cynghorion until we reached the zig zags that took us up to the Clogwyn Du’r Arddu ridge. The wind here was strong and the temperature dropped quickly so we kept moving and joined the Llanberis path and crossed the railway line before making our way to the summit where, for a change, we had 360 degree views over Glaslyn to the East and North towards Crib Goch. With the railway still not running and the weather forecast the summit was relatively quiet and after a quick lunch stop sheltered from the bitter wind by the café wall, we started to head back down. Whilst the descent was tough on the knees we made our way down passing team two en route and eventually we dropped out of the wind and, apart from a brief shower, continued back to the campsite with magnificent views of Mynydd Mawr and the Nantlle Ridge. A great day out with a great group of walkers!