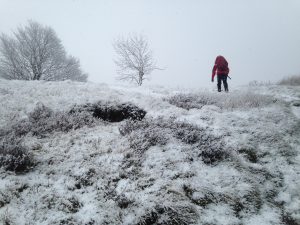 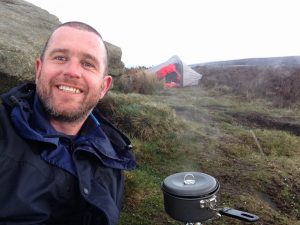 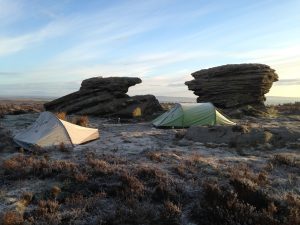 Last year Sam came over with his family from France and we had a fantastic day walk up Win Hill and over Crookstone Out Moor that concluded with a wild camp on the slopes of Grindsbrook Knoll. The weather was kind and we spent an enjoyable evening sitting outside our tents and admiring the view over the Vale of Edale. http://www.comewalkwithmeuk.co.uk/2015/04/a-kinder-wild-camp.html
With that in mind, it was no wonder he booked another overnighter for his family trip this year, the weather this time around proved to be somewhat less friendly but we none-the-less managed a great 24 hours in the Peaks.
We set off from Hope and followed the path over the grassed ruins of the Roman fort and into Brough before carrying on through Shatton and following the banks of the Derwent. It was as we were making our way along the river that we experienced our first snow shower of the day, it was that kind of wet, sleety slush that can be quite dispiriting but it came and went and we continued through Hathersage and up on to the Rininglow Road. It was here that Winter decided she hadn’t quite finished with us and the snow started coming down hard prompting a kind and slightly bewildered American tourist to stop and offer us a lift to Sheffield. We declined and made our way up on to Carl Wark fort, a well preserved Iron Age remnant, it was a bleak enough afternoon in our modern waterproofs and it made me shiver to imagine an Ancient Briton or Roman sentry standing vigil in such inclement conditions. However by the time we had dropped down into the valley below Burbage Rocks the sun was shining and we gently steamed as we ate a late lunch. We climbed up the path over Burbage Rocks and followed the Houndskirk Road down towards Ringinglow. I’d originally thought to camp in the shelter of one of the walls near Sparkinson’s Spring but as the sun was out once more we decided to pitch and cook in the shadow of the Ox Stones. We cooked up dinner and chatted to a local mountain biker before the snow started again and we bedded in for a very chilly night.
Chilly night or not, there is something wonderful about waking to a landscape bathed in early morning light and with not another soul to be seen. Both tents were stiff with frost and it was with somewhat numb fingers we decamped and forced down a quick breakfast. Leaving the Ox Stones behind we headed out towards Rud Hill and the moorland above the Redmires Reservoirs. There were Curlews and Lapwings about but no people as we skirted the forestry plantation up to the Stanedge Pole and then followed Stanage Edge in glorious sunshine, a marked contrast from the grim weather of the day before. We continued through farmland watching the Spring Lambs and then on through Bamford and the fields below Aston before emerging back into Hope and heading off for a very welcome Hot Chocolate!
It was a brilliant 24 hours with Sam who is great company and a very good sport. The contrast in temperature between the South of France and the snowy Dark Peak would have been a challenge for anyone but he handled it with great spirit and I look forward to next year’s expedition already