A walk from Lizard Point to Mullion Cove 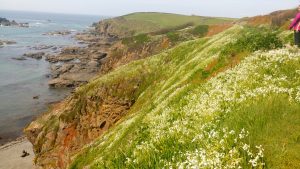 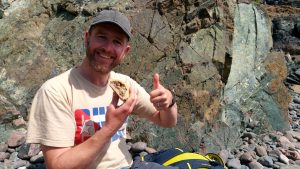 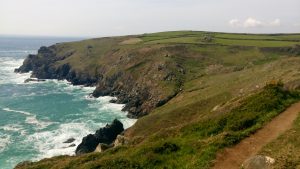 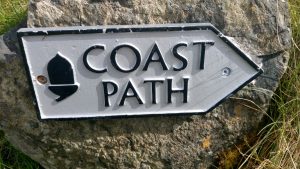 I like to visit extremities, Northernmosts, Southernmosts, Highests and Lowests, something about them appeals to the collector in me. This was my first trip to Cornwall and I’d already decided it was a great spot for bagging a few for my British collection and getting a few coastal miles in at the same time. We’d already visited Land’s End and whilst the stretch of coast was standard “beautiful Cornwall”, it was somewhat defaced by the monstrous theme park that had somehow been allowed to plonk itself right on the doorstep. So, when the chance arose to head down to the Lizard Peninsula and visit the Southernmost point on mainland Britain it was an opportunity not to be missed!
Lizard Point is not devoid of development, there is a café, an artist’s studio and a gift shop but it lacks the spectacular crassness of the development at it’s more famous counterpart. It’s a rocky promontory with fine coastal views in either direction and we basked on a sunny rock and watched a couple of Grey Seals drifting lazily with the currents. Eventually we stirred our reluctant limbs into motion and set off along this magnificent section of the South West Coastal Path. As with the rest of Cornwall, the wild flowers were out in profusion and the Thrift and Harebells provided colour and contrast as we picked our way along some of the finest coastland I have ever walked. It was spectacular, deep coves cut into the cliffs and the path rose and dropped over streams as seabirds and corvids wheeled overhead on the thermals. Waves crashed on rocks and the smell of salt was in the air as we continued under blue skies that wouldn’t have disgraced the Mediterranean. We were racing the tide to Kynance Cove but made it in time for a picnic of Cornish Pasties and sun melted cheese sandwiches on the beach as the tide flowed in to meet us. The steep climb back out of the cove was punctuated with view stops and plenty of photographs.
The second half of the walk saw us turn with the coast and walk through flat, somewhat bleak heathland grazed by wandering herds of cattle. It was easy, flattish walking but with the sun overhead we were relieved to see the Mullion Cove Hotel perched on the headland with a clear view of Mullion Island ahead. The island is made of volcanic lava and in 1979 the MV Shoreham ran aground there and was damaged so badly it had to be sunk. We, however, managed to keep going and descended through the Gorse to the cute little harbour at Mullion Cove complete with a couple of small Crab boats on the jetty and a shop selling very welcome cold drinks. We’d left a car at this end of the walk and returned to Lizard for a very welcome pint in “The Witchball” , the most Southerly pub in mainland Britain!
The Cornish coast is spectacular and a worthy equal to any of the spectacular coasts I have walked in California, New Zealand or Western Australia. The people are friendly, the pubs are great and there are plenty of local breweries, and the seafood is immense. I can’t believe I’ve never visited before but will not leave it 43 years before I do so again!