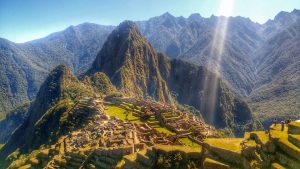 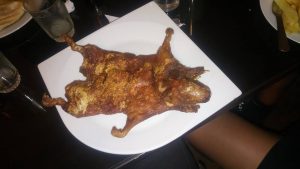 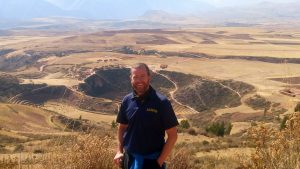 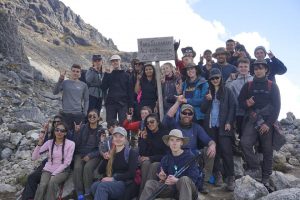 Peru has long been on my bucket list, especially the stunning Inca site of Machu Picchu so when the opportunity to lead a Summer expedition there arose I jumped at the chance. This was my fourth trip with Camps but my first to South America and I was very lucky to lead such a committed and hard working team!
After a convoluted series of flights via Madrid and Lima we finally arrived in Cusco. The city was the ancient capital of the Inca empire and is based around a stunning central square that houses the cathedral. We returned to Cusco a number of times during the trip and it’s a great city, lively, vibrant and full of interest. Our first camp was on the shores of Lake Titicaca, the highest navigable lake in the world and a beautiful spot. The students worked on a number of community projects which included making adobe bricks, clearing ground for a new playground, painting classrooms and making ovens for houses in the local community. In addition to the hard work we played lots of football and volleyball with the locals, we undertook a practice trek to a nearby viewpoint and we visited the remarkable floating reed islands of Uros where families live on thick reed mats anchored in the middle of the lake. We also spent a night on Isla Taquile where we camped on the beach and in spite of the rain overnight we awoke to a beautiful sunrise over the lake.
Our second camp was at Moray perched high above the Sacred valley with spectacular mountain views. It was chilly here and mornings saw our tents covered in thick frost. It was bucket shower territory with the water heated by a roaring fire, the stars at night were wonderful. This was a very poor area and we saw locals ploughing their fields using Ox drawn hand ploughs. Most of the work here involved manufacturing scaffolds to help build toilets for the locals, a lot of cement was mixed and bricks unloaded and although it was hard work it was very rewarding. We undertook another practice hike in the hills above the Moray archaeological site. The site was an amphitheatre that the Incas used as an agricultural centre where different crops were grown on different terraces so the best growing conditions could be deduced. It was stunning when viewed from above with a backdrop of snow capped mountains.
One of the highlights of the whole trip was the trek to Machu Picchu. We took the Salkantay Trail and over five days we climbed up to 4600m and then descended from the snowy tops into the tropical jungle. It was an epic trek, challenging yet achievable and in addition to the stunning scenery there was plenty of Inca history, a campsite with a view of Machu Picchu and an opportunity for us to hand grind our own coffee. Our last camp was in the village of Madrigal next to the Colca Canyon, the second deepest in the world. We arrived during the festival of St Santiago, an extremely boisterous celebration which seemed to involve most of the locals getting drunk and marching around the village behind various brass bands…..it was quite something. We worked on building an irrigation channel, we made adobe bricks, painted murals at the school, played football and learned some Spanish before a walk on the last day which took us down to the mouth of the canyon itself.
Our last day was spent in Arequipa, the second biggest city in Peru and another city with a spectacular central square. Here we enjoyed the luxuries of hot water and wifi before trying out the local delicacy of cuy (guinea pig), not a lot of meat but quite tasty. Peru is a spectacular country, wild, mountainous and barren. I met some great people and had a brilliant time so huge thanks to Camps and the great bunch of students from Beauchamp for offering this opportunity.