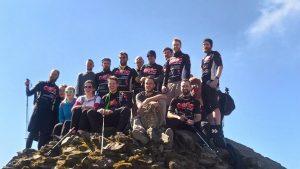 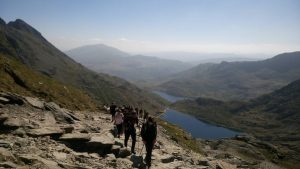 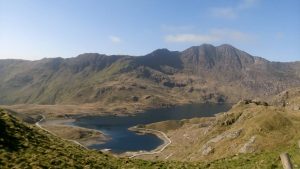 I have done a lot of Snowdon days over the last few years. It still remains one of my favourite mountains in the UK in spite of the many, very real problems it’s popularity causes. A fair few of the Snowdon days I have done have been as a part of Three Peaks Challenges, with Wales’s highest mountain usually being the last leg of the gruelling (and also in it’s own way controversial) challenge. People can get quite “sniffy” about the mountain as it is so popular and the challenge has it’s critics but in my personal experience the groups I have led up Snowdon have usually raised a lot for money for great causes, pushed themselves to their physical limits and been respectful of the mountain, the guides and other people undertaking their own personal challenges. However, none of the challenges that I have undertaken in recent times have had the emotional impact on me that this Maximum Adventure organised day with Team Ep1c has had.
Not only did Team Ep1c complete the Three Peaks Challenge on a beautiful, fantastic sunny day which gave us wonderful 360 degree views from the summit, they did it immediately after cycling from Land’s End to John O’Groats in ten days……..I think that everyone can agree that that is an insanely brave and challenging thing to do and I was genuinely in awe of the physical challenges undertaken over the two weeks. The impetus for the event was the loss, in a short space of time, of five close family members and friends in particularly tragic circumstances. It was an incredibly emotional day for everyone concerned and I am proud and pleased to have provided support for the final (relatively insignificant) part of the challenge!
Anyway, I climbed on board the bus outside “The Vaynol Arms” in Nant Peris after a night camping under the clearest of skies and fullest of moons. Usually on a Three Peaks Challenge the group are quite tired and subdued at this stage, it’s rare to be greetd by loud, football style chants of “Ian, Ian, Ian”, but it set the tone for the rest of the day. It was cold and clear and the sky was cloudless as we left Pen-Y-Pass and made our way up the Pyg Track to the junction with the Crib Goch route. We followed the path traversing high above Llyn Llydaw and climbed slowly but determinedly up the zig zags and onto the final ridgeline where we were treated to truly magnificent views from the summit in all directions. Our descent was slowed by wavering muscles and creaking knees but we dropped down onto the Miner’s Track and the group had an emotional reunion with the support team having achieved this incredible and humbling feat.
Some mountain days stick in the mind because of the view, some because of the physical challenge, some because of the company, but very rarely do all three coincide on the same occasion. I’ll remember this day for a long while.