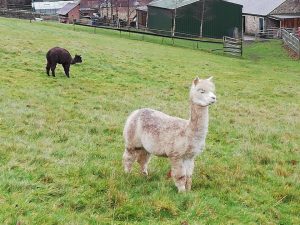 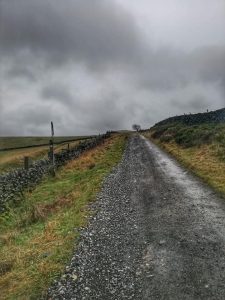 The area around the Hope Valley is one of those fortunate spots in the UK’s National Parks that has genuinely good public transport links with the added advantage this brings of planning linear walks. Since injuring my knee during an Autumn expedition to Cambodia I haven’t had the chance to get out and do any personal walking so when Nathan (and his new companion Ruby the lab/collie) invited me on a wander from Hope to their new house in Grindleford it seemed like to good an opportunity to miss.
It was a fairly grim morning as the train made it’s way through the Stockport suburbs and out into the Peak District and as our trains pulled into Hope station simultaneously the steady rain that was to accompany us pretty much for the whole of the walk started to fall. Leaving Hope behind we headed up through Brough over Rebellion Knoll and out onto Abney Moor which had a suitably bleak aspect on a day like this. It’s unusual in the Dark Peak to see so few people but on Abney Moor we bumped into one of the few other walkers we saw all day, maybe the weather helped in that respect! Coming to the edge of the moor we passed the isolated farm of Abney Grange before the steep descent into Bretton Clough, a steep sided valley reputed to be where farmers from Eyam hid their cattle from the marauding forces of Bonnie Prince Charlie on his Southward march in 1745. The climb out was just as steep but took us to the road from Great Hucklow which leads past the gloriously appointed Barrel Inn at Bretton, sadly we were there a little too early in the day to partake of any refreshment but the views, even on a grim day, were superb and it’s been noted down for future exploration.
We continued on along the rough track that runs past the radio mast on Sir William hill. The hill has been known by this moniker since at least 1692 when there was an entry in Eyam Parish registers of the demise of one Elizabeth Trout who died in the snow coming back from Tideswell market but the origins of the name appear disputed and we can find know definitive Sir William! We dropped down sharply into the “plague” village of Eyam where during the Great Plague of 1666 the villagers undertook a self imposed quarantine in order to stop the spread of the plague. 260 villagers died during this period but they prevented the further spread of the disease. Nowadays it’s a charming village of tea rooms and pubs and, in an unlikely twist, an Alpaca farm, the residents of which greeted us as we wandered down into the valley. Our final section of the walk took us along a stretch of now disused road before the descent into Grindleford where we finally managed to escape the weather! Hopping on the train at Grindleford station, next to which is the redoubtable café, a bikers favourite, it was an easy run back to Manchester and a hot bath and a cuppa!