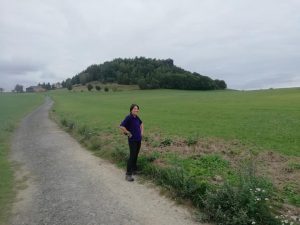 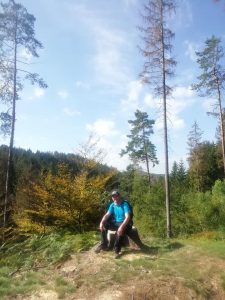 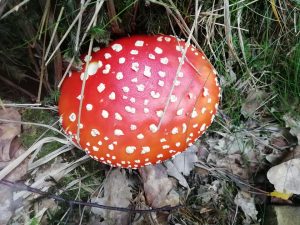 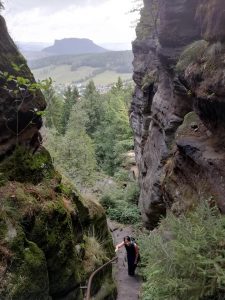 Day 5 kicked off with an early start to catch the bus back to Neumannmuhle. We had realised over the first four days that most people walking on the Malerweg weren’t backpacking the route but operating from a central location as we were now doing for the next few days…..it certainly felt good to only have a daypack to wear! It wasn’t long before we were leaving the valley floor behind and winding our way up and down through heavily forested slopes of Beech and Pine. We saw Black and Lesser Spotted Woodpeckers on the route plus a huge variety of fungi and eventually we reached the Little Pohlshorn lookout where the vista of forest and rock gave a real “end of the earth” feel with no visible signs of humanity to be seen. After a refreshment stop at Zeughaus we eventually descended a remarkable, seemingly endless and very steep set of staircase down to the very pretty town of Schmilka where we crossed the Elbe on a tiny passenger ferry before catching the train back to Konigstein and a well earned tea of pizza and red wine 🙂
It was back onto the train at the start of Day 6 and after leaving the station we climbed steeply up to the twin towns of Schona and Reinhartsdorf, the former home to a festival in order of that much ignored vegetable, the kohlrabi. The towns and villages were all neat and well ordered, the gardens well tended and full of flowers and vegetables and the impressive woodpiles suggested that the Winter in this neck of the woods is fierce. There were more woodpeckers and Nuthatches in the woods that fringed the farmland above Kleinhennesdorf and each field was ringed with the elevated hunting hides from which the locals hunt deer and wild boar. It was a stiff climb to the historic lodge on Papstein and then another down and up over Gohrisch before descending back into Konigstein for our last evening in the very cute and friendly “Four Lions Hostel”. Konigstein was a lovely town sat in the shadow of the fortress and with much more in the range of facilities than most of the smaller towns we had passed through.
Day 7 started with Pfaffenstein, a huge rocky outcrop topped with forest, an ancient hotel and with views to the famous pillar of Barbarine, a huge “Old Man of Hoy-esque” pillar beloved by rock climbers since Victorian times. It was spectacular and beautiful and worth every drop of sweat shed on the steep stairs that led to the summit. After lunch in the square in Konigstein another climb took us up to the impressive fortress at Konigstein perched atop huge, seemingly impenetrable sandstone cliffs. It was great to finally reach the fortress as we had been able to see it on pretty much every day of our trek and it was spectacular. Unfortunately we didn’t have time to visit it as we headed onwards to the cute little town of Kurort Rathen. We grabbed the train back to Konigstein to pick up our big bags before carrying on to Pirna, an Elbe side city famous for the “Museum of the DDR” and paintings by Caravaggio who was invited there by members of the Saxon nobility and who fell in love with the area. It was a metropolis compared to the towns and villages we had visited in the last week and we gorged on kebabs and wandered the rainy streets feeling both happy and sad that we only had one day of wandering left!
One more early start and one more train journey along the Elbe-side track saw us with the ascent from Kurort Rathen and then a final rocky hurrah as we clambered up onto Rauenstein which encapsulated everything that was superb about the whole route. It was a long, forested rocky ridge with sandstone sculptures, Black Squirrels, ladders, steps and superb views. Leaving it behind felt like the end but we continued for a couple more hours through yet more woodland on narrow contouring footpaths before dropping right down to the bank of the Elbe. We carried on into Pirna and the main square and there ended our adventure, it has to be said slightly anti-climatically. There is no finish line, no indication the trail is over, you can’t even buy an “I walked the Malerweg” fridge magnet in the tourist shop. It simply ends! We celebrated with a delicious plum tart before another series of trains took us back to Berlin.
The Malerweg is a fantastic walk. It was certainly more challenging than I had anticipated, the steps were gruelling and some of the days long but it was undoubtedly worth it. The views were stunning, the forests wild, the towns and villages neat and ordered and there weren’t many people walking the trail. We heard almost no English accents and most of the walkers we met were locals. It’s an area that certainly deserves exploration so if anyone would like to give it a go please don’t hesitate to contact us!