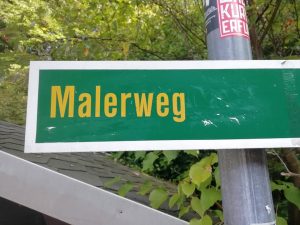 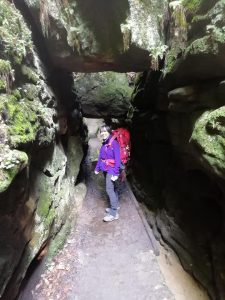 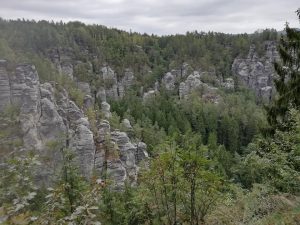 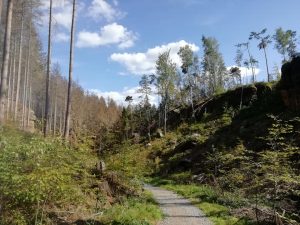 For Christmas last year my lovely girlfriend got me a fantastic coffee table book called “Wanderlust” which detailed in words and beautiful pictures many of the “great trails” of the world. In and amongst the more familiar walks of which I had heard I stumbled across the Malerweg or Painter’s Way in Swiss Saxony in Eastern Germany which seemed to consist of huge Germanic forests interspersed with hoodoo like sandstone sculptures. It was less than one hundred miles and seemed perfect for our first joint long distance trek together and so an adventure was born.
Before we started the trail we spent a day in Dresden. My knowledge of the city was confined to the fact that it had been heavily bombed by the RAF during World War two and subsequently rebuilt but I wasn’t prepared for just how beautiful the “old” city would be. Particularly impressive was the Zwinger Palace, a kind of mini-Versailles with hundreds of statues and a beautiful garden. Leaving Dresden behind we hopped on the train to Pirna, a commuter town about 25mins outside the city, where we spent a slightly spooky night in a very quiet Youth Hostel on the edge of town. The Malerweg is a very understated trail with little fanfare but, as is often the case in Europe, it is well marked with a series of signposts and painted Ms showing us the way. We hopped off the bus at Liebthaler Grund and with no other walkers in sight set off through a beautiful wooded glen and onto our adventure. Day one was a pretty gentle introduction as we skirted farmland and deciduous woodland before plunging into pine forest which was dotted with fantastic sandstone sculptures and rock formations. We were booked in an Air BNB on the outskirts of Stadt Wehlen which necessitated a detour along the Teufelgrund and then a series of hand and knee scrambles through ever diminishing crawl spaces in and amongst the formations. The sun had shone and we were underway and happy to sip a glass of wine and then sleep the sleep of the exhausted in our comfortable accommodation.
Day two proved to be a different beast and was our introduction to the rocky ridges and peaks that characterised so much of our walk. We headed down into the very pretty town of Stadt Wehlen spread along the banks of the Elbe and after a coffee and cake in the local bakery we started the long, steady climb through the forest of Birch and Beech towards Bastei, the pre-eminent tourist attraction in the region. The Bastei is a beautiful formation of jagged rock pillars and a bridge was built in 1851 which affords wonderful views of the Elbe and across to Konigstein fortress in the distance. The painter Caspar David Friedrich is closely associated with it and although it was the most crowded section of the walk it’s popularity was understandable. In a pattern that was to be much repeated after the up came the down, then another up, then another down and so on…… We passed through the pretty town of Rathewalde before another up and down took us up to Hohnstein where we had booked a room in the hostel housed in a rocktop castle! Another hearty meal involving lots of pork and a kip in a castle and day two was done!
Waking up in a castle! What a start to day 3, it was made even better by the view from our window of a cloud inversion in the valley below the very picturesque town. We left the hilltop behind and were back into the woods following a path that contoured through the trees above a valley. We detoured for an exploration of the enormous Gaustschgrotte, a spectacular cleft in the cliffs, before reaching the lodge at Brand for another spectacular panorama Westward. The now familiar staircases took us down into the valley, and then up again on creaking knees still shouldering the weights of our full packs. We passed through the village of Kohlmuhle, the one place on the trek that seemed reminiscent of old, forgotten East Germany with it’s huge, disused linoleum mill and abandoned houses….it had a feeling of melancholy about it that was very different from the pristine, manicured villages that characterised so much of the trail. One more slow, painful hill took us into Altendorf and our room for the night. We were sleeping by 9pm.
Day 4 was our last day under full pack, but it was also our longest day, so we were up with the larks and marching out of Altendorf by 7.30. Whilst it was a long day, I think it was my favourite with perhaps the best of the scenery starting with views of the huge formations of Falkenstein looming large against a cobalt blue sky. Schrammsteine is a justifiably famous formation and after a bit of packless fun scrambling about we climbed via a series of stairs and ladders onto the narrow, wooded ridge and traversed to the most spectacular panorama of the trip, the view seemed immense and endless and was simply breathtaking. We dropped down into a popular forest park and then climbed again to the Kuhstall (literally Cow stall) a huge sandstone arch and a tourist attraction since the early nineteenth century. We ended the day at Neumannmuhle where we caught the bus across the Elbe to Konigstein where the excellent Four Lions Hostel was to be our base for the next few days meaning lighter packs and a cute little town to explore. We were half way through the Malerweg and whilst proving a little bit tougher than anticipated it meant that the hard won views were well worth every drop of sweat!