Tideswell and the Seven Dales 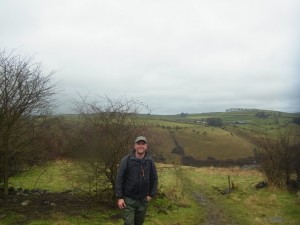 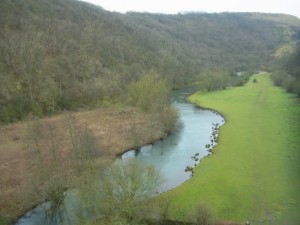 22.2.12
Walking with; Nobody
This was the first proper outing for the knee since the operation in mid-January and it passed it with a few creaks and groans. Tideswell is famous for the Church of St.John the Baptist which is so impressive in scale it has been named “The Cathedral of the Peaks”. It was built during the latter half of the 14th Century on the site of an old Norman chapel (parts of which were incorporated into the current building). Sir Samson Meverill, who fought against Joan of Arc, is buried in a magnificent tomb in the chancel and also laid to rest there is Bishop Robert Purseglove who became rich during Henry VIII’s dissolution of the monasteries and whose estate still pays a small stipend to Tideswell school to this day. It’s well worth a visit and a handy spot to get out of the rain. The village is also famous for a fantastic bakery, “Tindall’s of Tideswell”, one of the best refuelling stops in the area.
I left the village with the rain coming down and headed through Tideswell Dale, the site of an old basalt quarry with sculptures along the flat, pleasant riverside trail. There is an avenue of magnificent Beech trees and there were plenty of finches and long-tail tits darting in and out of the vegetation. The path continued into Miller’s Dale and the picturesque hamlet of Litton Dale. The original mill sited there was notorious for the conditions in which the indentured “apprentices”, usually children from the work house, were required to work, but the hamlet now has an air of gentility with woodsmoke curling from the chimneys of the stone cottages.
Leaving Litton Dale, the path climbed through woodland before crossing The Monsal Trail and continuing a steep ascent into Priestcliffe Lees Nature Reserve. The paths were wet and muddy restricting the pace of progress and making a coffee perched on some old lead workings with a view of the valley below a welcome respite……until the rain came again. I pressed on to another tiny farming hamlet called Brushfield, now mostly holiday lets by the look of things but with some beautiful snowdrops in the woods. The path continued on above Taddington Dale, a densely wooded valley, before dropping down to rejoin The Monsal Trail at the spectacular eponymous viaduct which has great views of the River Wye and Monsal Dale and on a better day would have been ideal for some lunch. I followed The Monsal Trail for about a mile, it runs along the route of an old Midland Railways line (complete with tunnels), passing the ghostly abandoned platform of Monsal Dale station before leaving it at the Cressbrook tunnel and dropping down to Cressbrook Mill at the head of Hay Dale. The mill is now a very smart conversion, but the mill-race still flows alongside the footpath and it isn’t hard to imagine it in it’s prime producing textiles for Richard Arkwright and, later, McConnel and Co.
The rain was coming down even harder now so the relative shelter afforded by the woodland in Cressbrook Dale was a welcome relief. Cressbrook is evidence that the rain is not an occasional visitor here. Every surface of wall, tree, root, even the ground itself is covered in lush, spongy, vivid green moss and it gives the wooded dale a distinctly Middle Earth feel to it. Leaving the woodland I followed the river up the valley before crossing the stepping stones and climbing the short, steepish ascent through Tansley Dale, home of more abandoned lead workings, to be met with spectacular views of the area. Dry stone walling is still a craft much in evidence in this part of the world and the fields are neatly parcelled up by some fantastic examples of this slowly dying art.
Last stop before Tideswell was Litton, a picture perfect village with a green, characterful cottages and a pub, The Red Lion, that was such a perfect approximation of a country inn that it would have been criminal to pass it by, so I didn’t. Log fires, quiet, relaxed atmosphere and a pint of “BG Sips” gave me the fortitude to head off on the last mile of my journey back to Tideswell and a visit to the bakery..
To view the full photo album for this walk, please click on the link below
https://www.facebook.com/?ref=tn_tnmn#!/media/set/?id=718985691&tid=136991043086476&frecId=false&skipClustering=true&qn=1330000879&success=25&failure=0&set=oa.161156327336614

5 thoughts on “Tideswell and the Seven Dales”