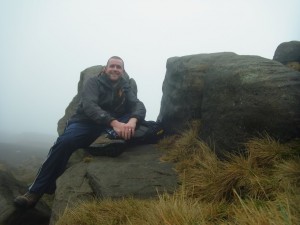 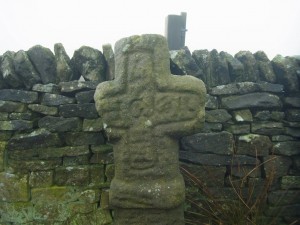 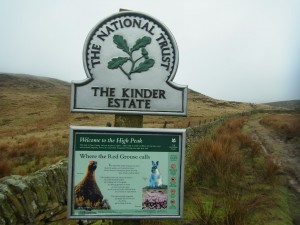 Walking with; Nobody
29.2.12
Hayfield is a picturesque Peak District village
which styles itself as the “Gateway to Kinder” although I suspect
Edale may have something to say about that! It was from Hayfield (Bowden
Bridge) that the Manchester contingent of the mass trespassers led by Benny
Rothwell set off towards Kinder on the “Right to Roam” protest, the
80th anniversary of which will be celebrated in April this year. It was also,
in 1745, the site of a mass “raising of the spirits” in Hayfield
church where eyewitnesses claim they saw hundreds of souls ascending from the
graveyard to heaven. I didn’t see anything quite as spooky as that but by the
time I’d reached the Kinder plateau the thick fog gave the whole area an eerie
feel!
I set off from the village and was soon climbing up past Hazlehurst Farm where
the guard geese announced my progress to the farmer. The path continued along
what was once a Roman road but today resembled little more than a stream….I’d
thought Tideswell was muddy but it had nothing on today. I continued on across
farmland before descending alongside Elle Bank Wood into the Sett Valley and on
up Coldwell Clough past the magnificent Grade 2 listed farmhouse (see pic).The
track up to the Kinder Estate was rough and muddy and though the views behind
me were worth the effort the cloud was starting to drop and by the time I
reached the Edale Cross it was very poor indeed. The cross is believed to be a
Medieval parish boundary marker probably erected by Cistercian monks and had
lain buried in Peat bog until it was discovered in 1810 by two local farmers
who carved their initials and the year of discovery on the front of it. The
alcove the cross sits in is a perfect place to shelter from strong winds and
enjoy a coffee and (distinctly retro) orange Club biscuit.
I took the Pennine Way on to the Kinder plateau and headed for the Edale Rocks
looming mysteriously out of the thick fog. Every so often I could hear
dislocated voices coming out of the gloom and at one stage a party of
disoriented fell runners emerged a couple of feet away……I’m not sure who
was more disconcerted. The poor visibility meant a change of plan and I headed
back down the way I’d come before joining The Tunstead Clough footpath which
followed the contours round under Kinderlow End and The Three Knolls (still
shrouded in fog) before dipping down towards the reservoir. Whilst walking this
section I saw four Curlews flying overhead and I could hear Lapwing but they
managed to remain elusive today! It was a steep climb from the reservoir up to
Middle Moor and The Snake Path which would lead me back down to Hayfield. The
paths met up near a shooting cabin and judging from the number of Grouse in the
area it would be a pretty productive spot for a gun on the Glorious Twelfth.
The Snake Path was the first success, in 1897, for the Peak and Northern
Footpath society who had campaigned for greater public access to the Moors. The
five wrought iron kissing gates were the originals but had been restored in
2009 whilst retaining as much of the original material and composition as
possible. It seemed a fitting end in this area much associated with walking
history and led me gently down into the village and a cuppa at Rosie’s tearoom.
To see the full photo album for the walk please click on the link below;
https://www.facebook.com/media/set/?id=718985691&tid=136991043086476&frecId=false&skipClustering=true&qn=1330682373&success=18&failure=0&set=oa.166452610140319