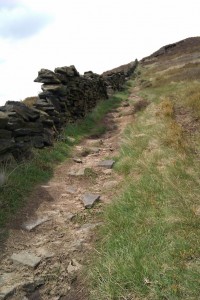 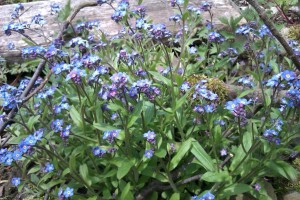 I was due to be heading out on my Silver Navigation course but it was unfortunately cancelled at the last minute leaving me stranded in New Mills with full kit. The sun was, none-the-less, shining and I felt it was too good a chance to miss and not to get out and about in the hills. I parked at the head of the Sett Valley trail and started off down the track which follows the route of the old branch line between Hayfield and New Mills and was lined with bluebells, cow parsley, forget-me-nots and celandines. It is a busy route, probably due to its flatness and relatively short length, and there were plenty of bikes, pedestrians and horses for company.
After about a mile The Pennine Bridleway leaves the trail and heads sharply up the side of the valley towards Lantern Pike. The path starts off quite roughly before it becomes smoother but continues to head steeply up. A short scramble along a dry stone wall bought me onto the very windy summit with spectacular 360 degree views taking in seven counties not to mention the vast brooding bulk of the Kinder Plateau. It was a pretty spectacular spot and I had it to myself as I hunkered down in a sheltered spot amongst the rough heather for a bit of lunch. I followed the track on downhill towards the junction of five paths at Blackshaw Farm. Continuing forward on the Pennine Bridleway I followed the track as far as Matley Moor before setting off across the boggy land putting up a Lapwing en route to the farmland on the other side. My loop then led me back past Knarrs and along a narrow path above the wooded valley of Hey Brows where I saw a beautiful pair of Wheatears sitting on a stone wall. I carried on past a couple of pig sties full of wallowing sows and piglets and then headed back to the Blackshaw Farm junction. I decided to follow the path home via the hamlet of Little Hayfield with its beautiful converted mill sitting on the edge of the Sett before heading along the cinder path into Hayfield itself and a welcome pint of Cumberland Ale at “The Kinder Lodge”.
To view full photo album please click on the link below;
https://www.facebook.com/#!/media/set/?set=oa.208041319314781&type=1