The Old Man of Coniston 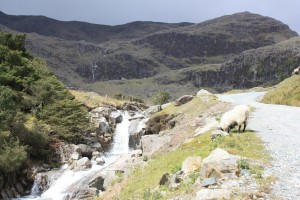 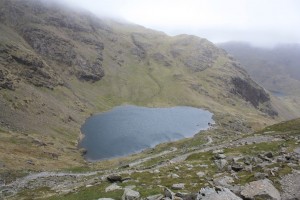 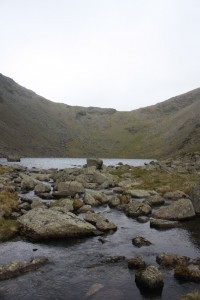 I think it is the name that has always made me yearn to climb the “Old Man”, it has a benign sounding feel at odds to the exposure to the elements that summiting it can chuck at you. The peak itself is at 803 metres which means it just squeezes into the top forty mountains in England! The peak is supposed to be the inspiration for “Kanchenjunga”, the mountain climbed by the Swallows and Amazons in Arthur Ransome’s book “Swallowdale”. It is also a mountain very much shaped by man (as indeed is most of the Lake District). It is estimated that slate has been quarried on the mountain since Norman times, not to mention sheep being grazed on the slopes and copper mining which began towards the end of the 16th Century. Coniston itself is a pretty village, less busy than Ambleside and Bowness, but well supplied with pubs and nowadays famous for Donald Campbell and his tragic attempt on the World Water speed records. Many years before Campbell though it was John Ruskin though who bought fame to the village and who lived in the spectacular Brantwood on the shores of Coniston Water, the third largest lake in England.
I set out from the village green in reasonable sunshine and ascended past The Sun hotel, the path ran alongside the fast flowing Church Beck and up towards the ruins of the old coppermines now home to a YHA and some beautifully situated holiday homes. There were plenty of Herdwick Sheep and every stream was full of water swelling the falls into picturesquely spectacular cataracts. The steady climb upwards took me through the abandoned slate workings and up into the clouds before stopping for lunch at Low Water, a well situated tarn at the bottom of a bowl below the Old Man. The path to the summit took me into the clouds as it zig zagged up the side with occasional views back towards the village and the lake. The summit was wind blasted and the cloud was down so after a brief stop for the obligatory photo it was onwards along the ridge before dropping down to Goat Hause and then after a steep descent to the moodily situated Goat Water in the valley between the Old Man and the forbidding rockfaces of Dow Crag. I continued onto Little Arrow Moor and across the Walna Scar Road before hitting another quarry (complete with spectacular waterfall) and then continuing onto the village of Torver.
Torver saw the heavens open and I pressed on in the pouring rain towards the lake. I passed through the beautiful woodland of Torver Common where the Oaks and Birch were coming into leaf with the vibrant pale green that only comes with early spring before emerging on the lakeside at the exact spot where a group were barbecuing under a huge tarpaulin and the smells of cooking meat hurried me onward. The path hugged the lakeside with fine views of Brantwood until I hit Coniston Hall and cut inland back to the village through fields of Herdwick Sheep and their lambs to The Crown Inn for a pint and some welcome shelter from the deluge.
I had planned to stay in the YHA for a night and attempt another walk the next day but car problems meant I had to leave Coniston behind and head home a day early, however my appetite is now whetted and I can’t wait to be back in this part of the world!
To view the full album for this walk please click on the link below;
https://www.facebook.com/media/set/?set=oa.216812715104308&type=1

2 thoughts on “The Old Man of Coniston”