The Pony Path up Cader Idris 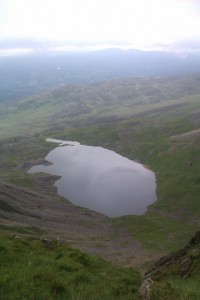 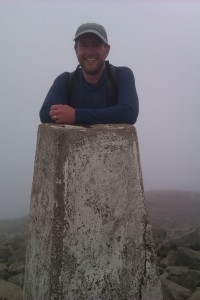 Cader Idris is reputed to be the second most popular mountain in Wales and at 893m it is a decent hike and one of the top twenty Welsh peaks heightwise. The name means “The Chair of Idris” and whilst there is some debate as to whom exactly Idris is, the accepted wisdom is that it refers to Idris the Giant, a 6th Century Welsh Warrior/Poet?King and semi-mythological figure. There are many associated myths and legends attached to the mountain including the belief that anyone spending the night on it will wake as either a madman or a poet. Cader is noted for it’s typical glacial features including Llyn Cau, a classic glacial lake nestled below the summit. We had decided to take The Pony Path, probably the most popular route up, but with the weather already starting to close in it seemed to be a prudent choice.
The path starts by Ty Nant, a formidable and impressive stone farmhouse, and leads up alongside a stream through woodland and, at this time of year, many foxgloves. There are some magnificent Sweet Chestnut and we put up a Redstart as we left the trees and began the long zig zagging ascent up the flank of the mountain. The path moves from grass to rock and the climb is steady, but the sensational views down the valley provide ample excuse for “view stops”. After a while the path reaches the ridge and then curves around and we followed a line of cairns up to a great viewpoint of Llyn Cau, well below us now and visible for only a short while before the cloud came in and masked it from our view. The cloud was already low and the final walk and scramble along the narrow ridge to the summit lacked views but felt like a decent achievement none-the-less. There is a shelter/bothy just below the summit and we shared lunch there with a very bold and handsome Herring Gull who scavenged for any crumbs that we dropped and generally kept a beady eye on us. We followed the same route down eventually emerging from the cloud into steady, persistent rain of the type that soaks you right through. The views on a clear day would be magnificent but it was a satisfying summit and as I had ascended it 25 years ago as a child, it was also a nostalgic peak to be climbing as probably the last one before my operation next week.
To view the full album please click on the link below;
https://www.facebook.com/media/set/?id=718985691&tid=136991043086476&skipClustering=true&qn=1340314952&success=13&failure=0&set=oa.238620786256834

4 thoughts on “The Pony Path up Cader Idris”