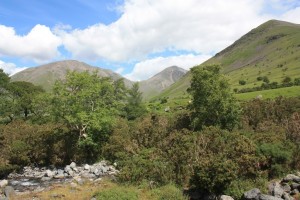 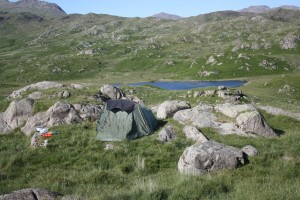 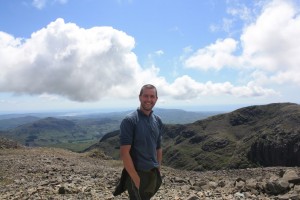 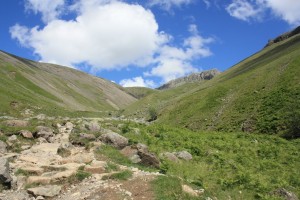 Working on Saturdays and Sundays mean my weekends are now Mondays and Tuesdays and with an operation looming at the tail end of next week I was determined to make the most of my last week of freedom and full health. I’d decided to try a wild camp on the Monday night and then meet Greg on Tuesday for an ascent of Scafell Pike as a prelude to his attempt on the Three Peaks in a couple of weeks time (http://www.justgiving.com/Greg-Price0).
I parked up at the Wasdale Head carpark after the fantastic drive along the shores of Wastwater, England’s deepest lake. With the sun shining and barely any clouds in the sky it was easy to see why ITV viewers voted Wastwater “Britain’s Favourite view”. Walking away from the lake I turned in the opposite direction to the group heading towards England’s highest mountain and climbed the bridleway above Wasdale Head Hall and soon hit the boggy moorland between Illgill Head and Hard Rigg. Ahead of me sat Burnmoor Tarn with the forboding (and reputedly haunted) lodge standing sentinel above it. The Lodge was built for hunting by Lord Leconfield in the latter half of the Nineteenth century and it looks pretty dilapidated and forboding nowadays! Whilst it looked like a reasonable spot for a wild camp I thought it might be a bit busy so after lunch at the foot of Hardrigg Gill, watching swallows dipping and swooping over the moor, I headed up behind the Lodge onto Boat How for some fantastic views back towards the Scafell Massif, down Miterdale and across to Eel Tarn. Deciding Eel Tarn looked like a decent camping spot I struck off across the marsh and tussock grass which made for slow progress before fording Whillan Beck and making slow, sweaty progress up to the Tarn. The name is apparently nothing to do with what might dwell in the waters but rather a bastardisation of “Evil Tarn” which apparently comes from the ancient Norse name. There were Black Headed Gulls nesting near the shore and Canada Geese and goslings on the water, not to mention Skylarks and numerous Bog Bean plants poking up above the surface. It is sandwiched between the beautifully named, Peelplace Noddle and Great Barrow which I eventually decided would be where I pitched my Vango Banshee for the night.
After brewing up and cooking tea on my trangia, I spent a very pleasant evening sitting in the sunshine reading my book (Last Orders by Graham Swift-recommended) and enjoying the views down to Eskdale and across to Harter Fell.
In spite of the beautifully sunny evening, about 4am I was woken up by the pitter patter of rain that rapidly increased in tempo and volume. I pulled my sleeping bag up over my head and hoped it would go away, but a couple of hours later I was taking down my tent in the rain with views of very little but cloud and a few disgruntled sheep! I headed down into Eskdale and followed the road which ran alongside the Eskdale-Ravenglass Railway, through the picturesque hamlet of Boot before reaching Eskdale Green where Greg was going to pick me up. A few delays here and there gave me time to peruse the village shop and the display of local history in St.Bega’s church including the remarkable photos of Mary Fair. By the time Greg arrived the sky was blue and the clouds were scudding into the distance and the world felt like a good place to be! We crossed Lingmell Gill and began the climb, sweating and puffing our way up Brown Tongue and through the Hollow Stones under the stern gaze of Scafell Pike and the marginally smaller Scafell. There was a lot of traffic on the path but we eventually made the summit and were rewarded with a cooling breeze and 360 degree views taking in Buttermere, Styhead Tarn and Great Gable and away on the coast the hulking shape of Sellafield loomed large. The descent was quicker with more wonderful views of Wastwater, a buzzard circling overhead and as we got towards the bottom some welcome shade and splashes of cooling water from Lingmell Beck. Job done and “Good Luck” to all the 3 Peakers in two weeks time!
To see the full album please click on the link below;
https://www.facebook.com/media/set/?id=718985691&tid=136991043086476&skipClustering=true&qn=1340308460&success=32&failure=0&set=oa.238573972928182#!/media/set/?set=oa.238573972928182&type=1