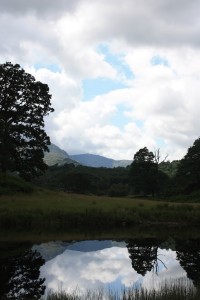 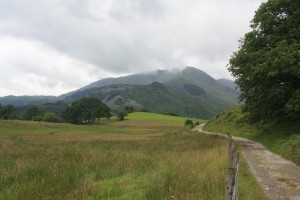 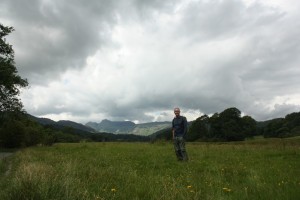 Two weeks since my hernia op and I felt it was about time that I got back out there, albeit in a gentle, non-strenuous manner. This undemanding perambulation in Langdale hit the spot and, in spite of the occasional shower, finished with a pint in the sunshine…..
The name Elterwater is believed to have derived from the Norse for Swan Lake and although we didn’t see any swans until the next day in Coniston, the birdlife was good on the walk with plenty of Swallows, Grey Wagtails and a beautiful Redstart all popping up en route. There were also some magnificent Oak and Beech trees occupying some rare, undisturbed patches of English woodland. We set off from the village and left the Coniston Road before climbing up an increasingly rough track that led through the margin of Sawrey’s Wood. The woodland opened out and we followed a path that skirted a well flowered hay meadow and allowed great views of the Coniston Fells down towards Little Langdale where the rain started to fall. We pressed onto Stang End Farm enjoying the views of the Brathay Valley and being glad we weren’t buried in the thick cloud coating the Peaks that were visible through the drizzle. We continued to follow the river through woodland until the sound of crashing water alerted us to the fact we’d arrived at Colwith Force where the Brathay falls about 40 feet to the valley floor over a series of narrow cataracts.
We continued on along The Cumbria Way and down to Skelwith Bridge where we watched the Wagtails for a while before venturing through the yard of Kirkstone Slate Gallery to Skelwith Force. Whilst the falls here are much smaller than Colwith, the passage the water is forced through is very narrow and the river thunders through here throwing up clouds of spray, even the wettest Summer anyone can remember has some benefits !! From the falls the path meanders along the bank of the Brathay to Elterwater with stunning views of the Langdale Pikes, surely one of the most evocative of all Lakeland views. Leaving Elterwater behind we passed a very angry cow, admired the redstart as he stayed a couple of fenceposts ahead of us all the way to the carpark and then, just as the sunshine made a welcome reappearance, crossed to the excellent Britannia Inn for a pint of their eponymous bitter! http://lakedistrictinn.com/