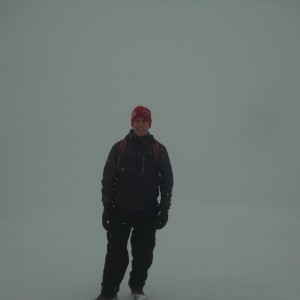 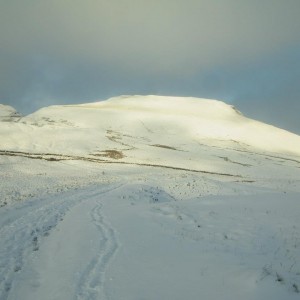 Tomorrow is my 40th birthday and I’d hoped to fit something special in as a prelude to this momentous landmark, luckily the weather seemed to be on my side and I had two fantastic days in the Peak District with snow lying thick on the ground and barely a soul to be seen. My plan for the Monday was to head over to Edale and up Kinder via Grindsbrook but as I drove along Rushup Edge the snow was already coating the raod pretty thickly and I decided to stop at Mam Tor and have a dander from there.
Mam Tor is one of my favourites, the “bang for your bucks” vista, the Great Ridge stretching out in front of you, the Bronze and Iron Age history and hill fort remnants and the broken road destroyed by the 1979 land slip. It’s accessibility, however, means the top is generally busy……not today. I stood alone in glorious solitude on the “mother mountain” in a complete whiteout, barely able to see two foot in front of me! It was too chilly to hang around so I continued along the ridge, dropping out of the cloud until I reached Hollin’s Cross. A toss of the coin took me down towards Castleton rather than Edale and as my footprints disturbed the untouched snow on Hollowford Road I passed Candle House and into the village for a cup of coffee and some respite from the falling flakes. Buoyed by caffeine and warm again I passed the colourfully named “Devil’s Arse” cavern and after crossing the bottom of Winnat’s Pass headed across the narrow, slippery path traversing the face of Treak Cliff to the Blue John Cavern. Blue John is indelibly linked to Castleton, a form of flourite it is found only in this area and has been mined since the 18th Century mainly for the production of decorative pieces. The caverns are closed at this time of year, but well worth a visit on a rainy day in the Summer. I had lunch back at my car before deciding to utilise the white out conditions to practice my navigation work. I headed down towards the Limestone Trail and has I reached it, the cloud broke giving fantastic views to a snow capped Win Hill in the distance. Red faced and chap cheeked I headed back to the car for another restorative coffee.
Snow was falling again (though lightly) as I parked up near Bowden Bridge, the site from where Benny Rothman led his group of ramblers on the Kinder Trespass of 1932. This site should be a mecca for all hill walkers, marking, as it does, the site of a formative event in challenging the restrictive access laws of the time. The trespass went up William Clough but I headed for Coldwell and Oaken Cloughs (where I spotted a Grey Heron and a beautiful Wren) and followed them up past the snowline to the Edale Cross. The views back to South Head and Mount Famine were stunning and the whole hill had that unique, sound muffled quality that snow tends to bring. The only noises disturbing me as I headed across Swine’s Back in beautiful sunshine, were the occasional Grouse and the crunch of snow and ice underfoot. I headed out to the cairn at Kinderlow Head before doubling back towards the Trig Point all the while using the snow covered terrain as navigational practice (this will be a big theme for the year as I work towards my Mountain Leader qualification). With blue skies and great views I worked across to Noe’s Stool before yomping through sometimes knee deep snow across the plateau to Red Brook and The Pennine Way. I followed the Way as it hugged the edge of the plateau over the Downfall with views to the Reservoir and Mermaid’s Pool before descending down William Clough,where the route once taken by Benny Rothwell and his band of protestors switched back and forth across an icy stream. The last mile was a gentle stroll along the reservoir and back down to Bowden Bridge. This was to be the last walk I took in my thirties and it’s fitting it was on one of my “local” and favourite hills, I was even luckier that the snow fell and sun shone. Roll on the next ten years!