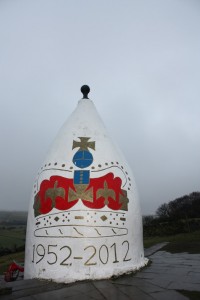 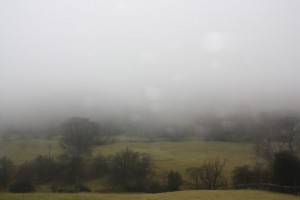 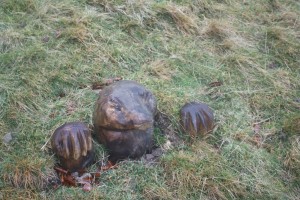 There are some days when it dawns on you about half way round your chosen walk that you’d be better off nestled in front of a log fire in a cosy pub (such as The Vale in Bollington) with a pint and a good book, rather than slogging through shin deep mud in a blanket of mizzle with views approximating to not much more than a foot in front of you. This was one of those days…….None the less I have set myself some quite demanding goals for the New Year and in order to achieve them sometimes it is just going to be necessary to get some miles under the belt and besides there were the 8lbs of Christmas excess to start shifting, so away I went.
White Nancy is an endearing folly and I have written a bit about it’s history on a previous walk up here (https://www.comewalkwithmeuk.co.uk/2012/04/white-nancy-not-shining-tor.html) and is one of those excellent hills, like Mam Tor or Win Hill where a relatively short slog gives great 360 degree views, in this case over the Cheshire plains. I continued staright ahead through the gloop onto the Saddle of Kerridge, the cloud had already dropped very low and the gnarled hawthorns peering through the gloom created the kind of eerie atmosphere where I could very well imagine Dick Turpin or somesuch nefarious bandit looming out of the murk. The path drops into Rainow, a Cheshire village full of picturesque houses with expensive cars parked in the driveways but seemingly blighted by the decline in rural facilities so commonplace nowadays. I was back home in East Sussex at Christmas in the village of Crowhurst where I grew up. When I was a child there were two pubs, a tearooms, a village shop and Post Office, two market gardens, a school and a church. On my recent return, the one remaining pub was on the verge of closure leaving the school and the poorly attended church as the remaining communal features of the area. Two of the three pubs I passed on my route today were closed and the buildings seemingly left to fall into disrepair…..a sorry state of affairs.
I continued across the fields to Four Lane Ends Farm and then on through ever deeper mud and fields of frisky bullocks past Withinlow Farm, which had passed the stage of picturesque dilapidation and reached the kind of state of decrepitude that if you were watching a horror movie and a bunch of attractive teenagers decided to camp in a bearby field for the night would have you screaming “Noooooooo, don’t do it…..” at the screen. The path continued over Black Brook and past Further Harrop Farm before linking back to The Gritstone Trail which gradually led me back towards White Nancy and the warmth of my car heater! As, so often with my wanders in Cheshire, the state of the paths was pretty abysmal and a stout pair of wellies would be called for if I were going to try and repeat this route

2 thoughts on “White Nancy, Rainow and The Gritstone Trail”