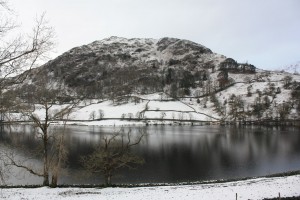 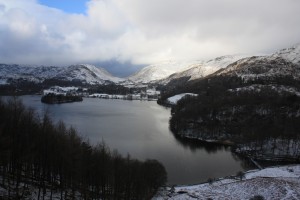 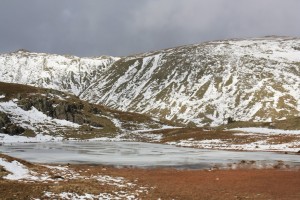 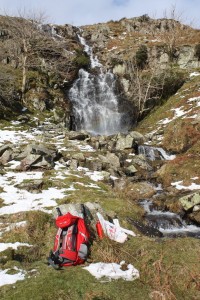 Last time I stopped in Grasmere was a couple of years ago on my Coast to Coast walk and my impression of the village was of a shrine to Wordsworth that lacked a decent Lakeland pub. I’d stayed in the Thorney How Hostel which at that time was owned by the YHA but is now operating on an independent basis. I stayed on this visit at the Butharlyp Howe hostel (pronounced Butterlip) and have nothing but praise for it, a beautiful building in an excellent location with Goldcrests in the garden. I arrived later than intended after too much wine the night before and fish and chips in Ambleside, so decided on something gentle to stretch the legs and stimulate the mind with thoughts of “lonesome wandering”.
Leaving Grasmere I headed out past Dove Cottage (Wordsworth’s home from 1799-1808 when he sold it to Thomas de Quincy) and started ascending on the old coffin route across to Rydal and Rydal Mount where Wordsworth lived later in his life. The coffin route is so named as before Rydal and Ambleside had churches of their own, bodies used to be carried (in coffins) to St Oswald’s church in Grasmere for burial. As I climbed out of the village I passed one of the coffin stones that was used to  rest coffins on in order to provide the bearers with a break. The path was very slushy underfoot, the dump of snow on Wednesday was already thawing and there was water everywhere, but the views across to Rydal Water were beautiful with the water reflecting Loughrigg Terrace. Passing Rydal Mount I continued through the village and after crossing the River Rothay meandered out onto the slopes of Loughrigg and the impressive caves caused by quarrying on the fell.  The walk along Loughrigg Terrace back towards Redbank Wood was breathtaking with views across Grasmere, Helm Crag and back to Nab Scar. Bags dropped off at the YHA I decided to try “Tweedies” bar and am very glad I did, there’s not much better after an afternoon on the fells than a log fire, some locally brewed real ale and a steak and kidney pudding!
Day two, I headed off from the hostel and took the path away from the village and onto the lower slopes of Helm Crag. Whilst I couldn’t really see any sign of the lion or the lamb, it’s a handsome hill and from the summit there was some fantastic views back to the lakes I’d trawled round the previous day. Wainwright wrote of it, ““The virtues of Helm Crag have not been lauded enough. It gives an exhilarating little climb, a brief essay in real mountaineering, and, in a region where all is beautiful, it makes a notable contribution to the natural charms and attractions of Grasmere” and I’d be hard pressed to disagree. Leaving the summit, I followed the ridge along to Gibson Knott and continued over the Pike of Carr and Calf Crag. It was warm work even with the snow still lying thick on some parts of the path. Reaching the head of Far Easdale I began the descent into the valley stopping for a beautiful sunlit lunch at the foot of one of the many waterfalls where the sun shining through the spray created some beautiful rainbows. Following Far Easdale Gill back towards the village I took the permissive path through the grounds of the Lancrigg where I was lucky enough to come face to face with a beautiful Roe Deer standing in the woodland at the hotel entrance……a perfect end to a very good day of walking.

4 thoughts on “A Grasmere overnighter”