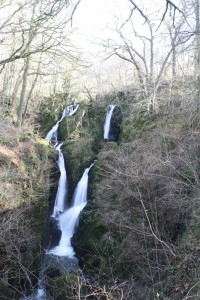 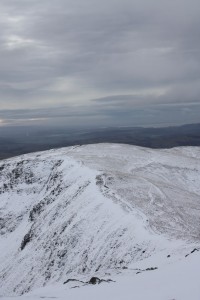 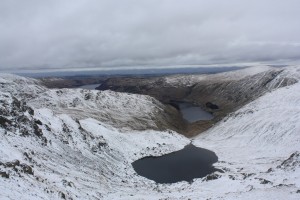 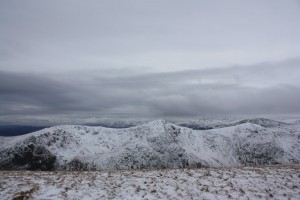 The Lake District in the snow is just about the best place to be in England so after a Monday snowfall I decided to head up there for an overnight trip staying at the Windermere YHA on the Troutbeck Road (http://www.yha.org.uk/hostel/windermere) . I got up there not long before lunch on the Wednesday and having parked up just outside Troutbeck set off up Robin Lane towards the snow sprinkled top of Wansfell Pike. As the path slowly climbed, the views across Windermere to the snow capped peaks beyond became ever more impressive. I turned onto Hundreds Road and then was out in open moorland and admiring the views across to Yoke and Ill Bell. The path was pretty iced up as I ascended steadily towards the South Western summit. The name Wansfell is believed to have been derived from the Old Norse for Woden’s Fell and with the wind whipping across the ridge reddening the face and making the eyes water it had a distinctly Scandanavian feel to it!
I began the descent down to Ambleside, the path remaining slippery underfoot, and after meeting a few people struggling up the slope I arrived in the park around Stockghyll Force. Stock Ghyll is a tributary of the River Rothay and the falls tumble 70 feet towards the town through a pretty wooded vale. After browsing a few of the plethora of outdoor shops I settled on a pint at “The Royal Oak” and worked out my route back. Leaving Ambleside via Skelghyll Woods, the path passed the remote farm at High Skelghyll before leading back round towards Robin Lane. The sun was still shining though and I wasn’t quite ready for home so added a loop via Wood Farm and Middlerigg Tarn (Goldeneyes, Pochard and Mute Swans) before heading back to the car and then the hostel via an hour of sitting in front of a crackling log fire at the fantastic “Mortal Man” pub (http://www.themortalman.co.uk/).
I was up early the next morning and parking my car in the layby next to Kentmere church just after 8am. Nowadays Kentmere is a tiny hamlet full of beautiful cottages but very remote, but it has an illustrious history and the fortified tower of Kentmere Hall is still a visible reminder of times past. The Gilpin family (who came over with William the Conquerer) owned the hall for 12 generations before all of it except the tower was destroyed by Cromwell’s forces during the Civil War. The churchyard still contains the graves of the few hardy families who settled this area and there were a number of memorials to “Yeomans” (free man owning his own farm).
The Garburn Pass was slippery underfoot but as I set off I saw a herd of deer on the skyline which buoyed my spirits and by the time I was trudging through the snow towards the summit of Yoke the sun was peeking out through the clouds and a couple of other hardy walkers could be seen in the distance. The ridge walk from Yoke over Ill Bell and Froswick to Bleathwaite Crags was awesome……stunning scenery, deep snow making for challenging walking and almost complete silence. The route to Mardale Ill Bell was through even deeper snow and by the time I reached Nan Bield Pass I was both exhausted and felt I’d been genuinely challenged! I clambered up the steep slope onto Harter Fell with it’s distinctive cairn spiked with metal and then continued across the exposed moorland through more deep snow to Kentmere Pike my final summit of the day. A little off piste descending scared both myself and the odd sheep before I finally made my way back to the edge of Kentmere and wound my way through the hamlet back to my car and a very welcome cup of coffee.
The Kentmere Round is a genuinely stunning walk and I would highly recommend it. It was challenging in winter conditions and it wouldn’t be a place to be out if you were underequipped, but the views from Windermere to Haweswater are more than ample reward!