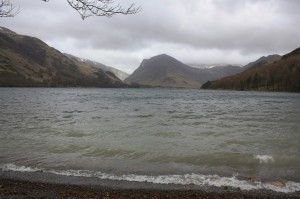 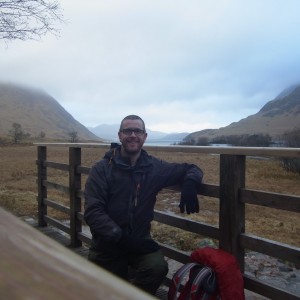 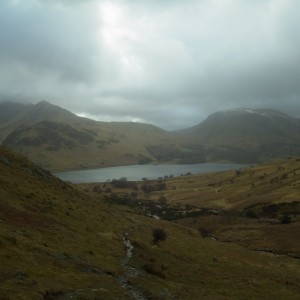 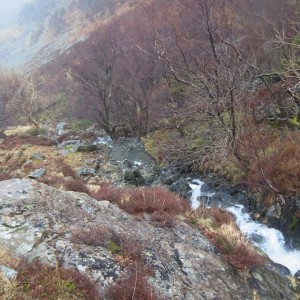 Illness had followed injury and I was itching to get out again and try the knee on something other than the grey, rain slick pavements of South Manchester. In my excitement I decided to dig out the tent and make it the first night under “canvas” of the year……..hmmmmm, perhaps a more than cursory glance at the weather forecast might have been an idea! I reached Buttermere over the Honister Pass and after setting up camp decided a gentle perambulation round the lake followed by a couple of restorative pints in “The Fish” might be a decent way to ensure no knee niggles remained. The water was coursing down Sour Milk Gill, but the clouds remained high and I could see across to Grasmoor and, up the lake, Fleetwith Pike. The circuit is a gentle, undemanding stroll, popular with dog walkers and families, but it felt good to be out again and Spring, in the shape of lambs, catkins, budding Hawthorn and flocks of finches chattering away, was very much in evidence. “The Fish” was disappointingly unatmospheric for such an historic inn, once home to the “Maid of Buttermere”, Mary Robinson, subject of a Melvyn Bragg novel and mentioned in Wordsworth’s “Prelude”. “The Bridge” sadly was little better so I retreated to my tent with my trangia and a bottle of Hesketh Newmarket beer.
3am, my Vango Banshee 200 finally gave in after five hours of manfully battling gusts of  upto 70mph and torrential rain, with a pop, the poles bent and I awoke to a faceful of wet tent……..to the car for three hours of fitful sleep as the gales howled around me. The advantage of being fully clothed and awake at 6am is that you’re pretty sure to be first out on the fells, so bleary eyed I headed towards the Scales Bridge and Crummock Water, keeping a half shut weather eye on the inky black clouds adorning the top of Fleetwith Pike. I passed Scale Force and rounded the end of Mellbreak into Mosedale and after reaching the famous Holly Tree (even marked and mentioned on the OS map), it was a steep slog straight up to follow the ridge to the accepted summit on the Southern end. The wind on the top was vicious and it was head down and across to the Northern end (putting up a Snipe on the way) for fine views across to Lorton Vale and where I was able to watch a Peregrine playing in the wind and spectacular sheets of spray coming off Crummock Water. The path down was a cross between a goat path and scree slope but I made it down to St Bartholomew’s at Loweswater and enjoyed a bit of RNR in the crocus and daffodil studded graveyard, glad to be out of the wind and imagining how tough life must have been for the Yeomans buried in family plots dotted between the flowers. Standing on the shores of Crummock Water was like facing an Atlantic gale, the wind was whipping across the water and as well as the spray, waves were crashing onto the shore, I’m not sure I’ve ever seen bigger waves on a Lake District water. I ended my walk by following the path up Rannerdale below Whiteless Pike before dropping down into Buttermere.
A night in the YHA in Keswick was more restful than the previous one, even if my dorm mate bore a startling resemblance to Charles Manson, in not only appearance, but, more alarmingly, behaviour! The morning, however, dawned wet and windy and I decided my old nemesis Skiddaw might not be such a great idea under the circumstances. Instead I headed off to Grange and decided to take on High Spy. In spite of the sheets of rain and gale force gusts, the scramble/clamber up Nitting Haws was great fun, the slopes cloaked with Juniper, Silver Birch and Holly and by the time I reached the plateau at the top of the falls I was really enjoying myself. As I edged up towards the summit ridge the wind suddenly intensified and by the time I reached the summit cairn I could barely stand and my face was being battered by needle sharp arrows of rain being driven across the ridge. It was not a time to be hanging around and, head down, I scuttled off towards the shelter of the old quarry works at Rigghead as fast as I could. Arriving once more on the Allerdale Ramble I met my first other walkers of the day, hardy souls that they were, before route marching back to the car, dumping my wet clothes in the boot and heading off to Tebay services for sustenance as fast as my Ford Focus could carry me!

6 thoughts on “A wet, wild and windy Lakeland trip”