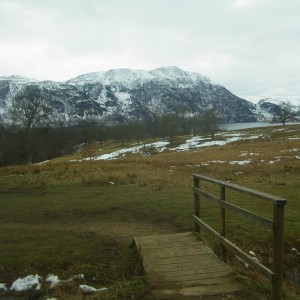 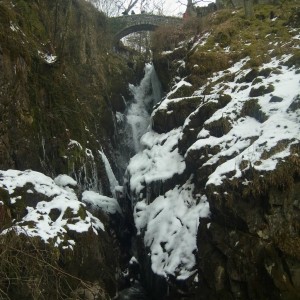 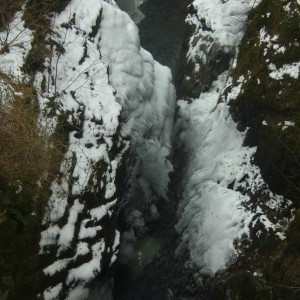 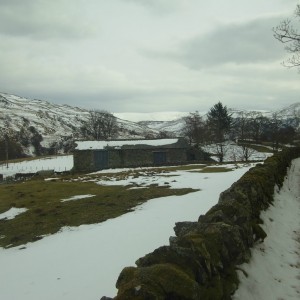 After a couple of weeks of indolence as a result of a rugby obtained knee injury it felt good to be out and about even on the gentlest of ambles. I was in the Lakes on a stag do staying at the fantastically appointed Blencathra Centre, in the shadow of the eponymous hill and with magnificent vistas of snow capped peaks. The stag and less injured parties were off scrambling in ghylls and via ferrata-ing, so it was left to me and Rich (hobbled by a hip injury) to enjoy a perambulation of a less demanding sort.
Wordsworth writes in his poem “The Somnambulist”, “Wild stream of Aira, hold thy course” and the falls are mentioned in two further works of his. They are certainly a popular spot and easily accessible from the Ullswater road. The name is believed to come from the Nordic “eyrara” meaning “gravel-bank stream” with the word force (or sometimes foss) being a commonly used term for waterfall. The land is now owned by the National Trust but was developed as a pleasure garden by the Howard family in the eighteenth century who landscaped the area around their hunting lodge. The two bridges are dedicated to members of the Spring-Rice family and are popular photo spots.
Our car park provided good views of Ullswater and the snowy hills beyond and we descended the gentle path through the pine arboretum before crossing the stream and climbing slowly up the other side of the valley.  The view of the falls from below is spectacular and was enhanced by the icicles and frozen spray decorating the surrounding rocks. We continued, following the river, until we eventually reached the tiny hamlet of Dockray for a pint of “hair of the dog” in the very attractive “Royal Hotel”. It was a simple matter of following the road back to the car then and whilst four ambled miles might not represent my most challenging walk, it felt could to be back out in the countryside once more, and even more pleasingly, the knee held up pretty well!