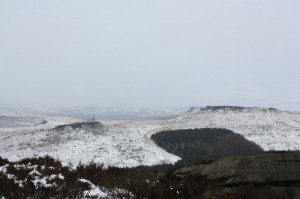 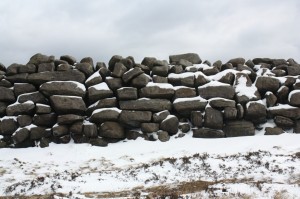 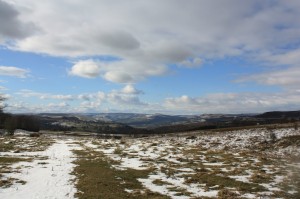 The skies were blue and the air crisp and I decided that such a day was not to be wasted in Manchester so, amidst the flurries of snow, headed off to do this walk which had been on my list for the past couple of weeks. As I headed towards Sheffield the skies grew darker and the snow a little more insistent, but there were plenty of hardy souls out and about and whilst this is not, in any sense, a wilderness walk there was still enough weather and heather to make it feel pretty wild at times.
I parked near “The Grouse Inn”, above Froggatt village, when I arrived it wasn’t open and by the time I’d returned it had shut……have to learn to time my walks better……..From there I headed up to White Edge and out onto the exposed moorland where the wind whipped plenty of snow into my face and forced me into digging out the hat and gloves. I carried on entering the grounds of the National Trust owned Longshaw Estate. The Estate was once owned by the Duke of Rutland who used it for shooting parties, however it was purchased from the Duke by public subscription in 1927 and presented to the Trust the following year. Eschewing the undoubted delights of the NT tearoom I carried on following the high path above the quarries onto Burbage Moor. The views from the edge took in my eventual objectives of Higger Tor and Carl Wark as well as the forestry plantation planted in the shape of Great Britain and which Sheffield Council are now talking of removing. The edge is normally a very popular spot for climbers but there was nobody brave, or foolhardy, enough to risk it today and I made it to Upper Burbage Bridge (for lunch) without meeting another soul.
Higger Tor itself, is a classic Dark Peak gritstone hill and whilst only attaining a height of 434m affirds some excellent views to Stannage Edge and Mam Tor and the Hope Valley. I descended and headed over to Carl Wark, a site I’d been meaning to visit for a long time on account of the (what are thought to be) Iron Age fortress remains situated atop it. Much mystery still remains as to the actual useage of the area and no remains of settlement have been found but the remaining wall is none-the-less a very impressive piece of work and has weathered over 3000 years of inclement Peak District weather admirably. The path back to the estate was boggy underfoot and I was glad to get off it and head down to Padley Gorge, a beautiful wooded valley just waiting for Spring to have sprung! The path follows the stream as it cuts it’s way towards Grindleford, but what goes down must come up meaning that after bypassing the village, it was a short, sharp shock that led me puffing and panting back towards “The Grouse”, just too late to console myself with a well earned pint!