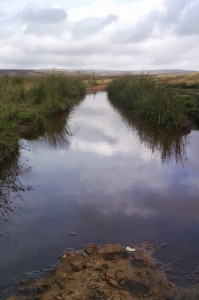 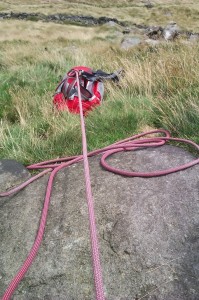 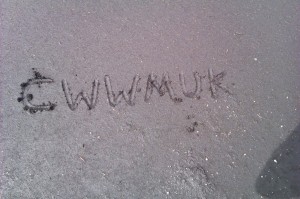 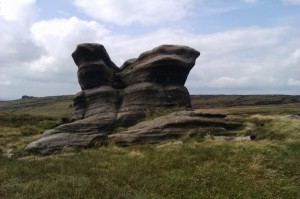 Another chance to get out onto the Peak District’s finest hill to work on my rope and navigation skills. Kinder is undoubtedly my favourite hill in the area, dramatic, historic and accessible and I decided to access it on this occasion from the lay by at the foot of Chapel Gate. This particular track has been the scene of much controversy over the past 18 months with banning orders for trail bikes and 4×4 and then orders being rescinded. However, early on a Thursday morning it was pretty tranquil and as I struck off towards Brown Knoll, with only a couple of other walkers in sight! The walk to Brown Knoll afforded great views to the Edale valley and the Great Ridge and in the distance were the various rock formations running along the flank of Kinder, Noe’s Stool, Pym’s Chair and the Crowden Towers.
On reaching the Swine’s Back I found a few likely looking crags and spent a productive hour abseiling myself and lowering and retrieving my rucksack up and down the slope, rope work has definitely improved over the last couple of months. Nathan and Manchester Climbing Centre have undoubtedly aided in this, but my poor long suffering wife, Ruthy, has been a willing volunteer to be belayed up and down the stairs in our flat! After a bite of lunch I left Swine’s Back and navigated my way through the groughs and peat hags towards the actual peak of Kinder Scout, marked on the map at 636m and a fair distance away from the trig point on Kinder Low. I came up slightly to one side but decided that the cairn to my left was likely to be the spot. Resting at the cairn I watched a couple of Curlew and then, even better, a Golden Plover. I picked my way back to Pym’s Chair pausing to eat a couple of bilberries before heading back to Edale Rocks and from there following the path that led me to South Head.
South Head looked tempting, the short, very steep haul up to the summit was an option, but I was in a rush at this stage, needing to pick Ruthy up from Stockport station and time had ticked on. I followed the Bridleway back to my car, being passed only by one mountain biker and finishing in the sunshine feeling pleased to have had a great day further refining my skills! It’s a slow process, but my accuracy and ability are definitely improving and my confidence is following with it!