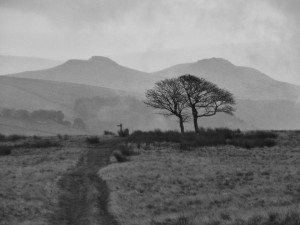 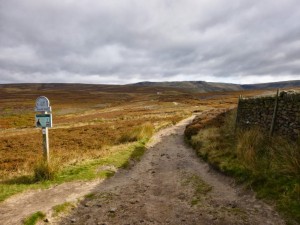 Well after the highs and lows and mizzle and drizzle of Galloway I decided a couple of gentler routes with some more micro-nav thrown in was just what the Doctor ordered. The Snake Path runs out of Hayfield and was created in 1897 by the newly formed Peak and Northern Footpath Society, it leads away from the village and climbs up to the grouse shooting moorland of Middle Moor where the bright white shooting hut is an easily identifiable landmark. There were great views across to the Kinder Plateau but I decided to head in the opposite direction circumnavigating the low, bulky hillock of The Knott. The Grouse that had survived thus far were out in force and whilst the wind had teeth it was pleasant to be out and about.
I cut up Hollingworth Clough, a pretty path that involved much crossing and recrossing of the stream and a not inconsiderable amount of Bracken bashing. As the Clough opens out numerous tributaries stream down the hillsides and I picked one and followed it up onto The Knott where the wind buffeted me about as I admired Kinder once more and the views down to Hayfield and beyond. I followed the line of newly spruced up, and obviously recently used, Grouse buttes back down to the shooting hut before retracing my steps down into Hayfield. It was not by any stretch of the imagination a great adventure, but my day was infinitely better for having stirred my bones and headed out onto the moors. It also raised the thorny question of how I feel about Grouse shooting. I am a dedicated carnivore, I happily eat game and have tried all manner of exotic varieties over the years and yet I still feel somewhat uncomfortable about the whole process. I acknowledge that our moorland often looks the way it does because of the shoots and that they provide employment for local people and have close associations with tradition, and yet……..it still doesn’t sit quite right with me.
A week later and I was climbing slowly out of Hope, into the fog and onto Win Hill which remains one of my all time favourite peaks in the Peaks! The weather was pretty grim and the valley floor disappeared beneath me as I watched a Kestrel soaring on the currents, no need to hover today. I followed the ridgeline from Win Hill along the route of the old Roman Road to the Hope Cross, and then onwards to Blackley Clough. Another spot of bracken bashing took me out onto yet another Grouse moor, buttes, feeding stations and what I took to be numbered “beating” stations littered the top of Crookstone Out Moor. I’d planned to carry on up to Madwoman’s Stones but by now the cloud had dropped even lower, the wind was blowing and the rain teeming down. Defeated, I trudged back towards Hope eventually dropping out of the cloud as I descended. A welcome cup of coffee at The Old Hall Hotel revived my flagging spirits but it definitely felt very Autumnal!