Walking and wild camping in Galloway 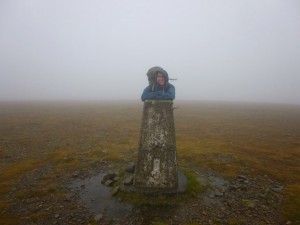 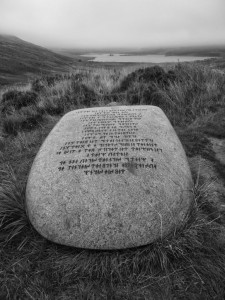 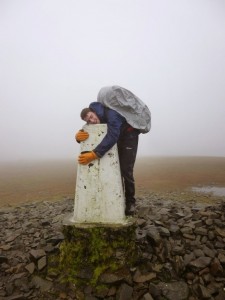 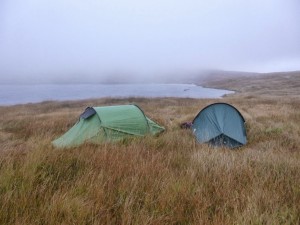 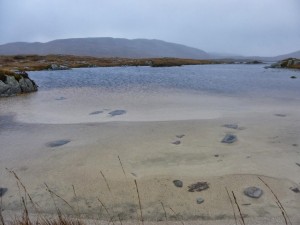 When I find myself writing that my previous walking experience in Scotland was limited to a family holiday 25 years ago and a straight up and down “Three Peaks” experience on Ben Nevis I feel slightly ashamed and a bit of a fraud. It’s like those Aussies who claim to have “done” England when they spent nine months living in a bed sit in Earl’s Court or claiming to have visited Thailand when you had a three hour layover at Bangkok airport. So, there was a situation to be rectified and this was the occasion to rectify it and sneak in a couple of nights out in the hills as well.
Galloway seemed accessible for a short layover (although it was still a five hour drive from Manchester) and I met Nathan in Glen Trool. I’d killed a bit of time at the Visitor’s Centre learning about the status of Galloway Forest as a “Dark Sky” park….sadly over the three days we were out we barely saw a glimpse of sky, let alone any of the spectacular starry skies the area is noted for. We set off along the Southern Upland Way, a long distance footpath that runs from coast to coast across Scotland. The Way here is basically a forestry road so it was easy underfoot but hardly the most scenic part of what is reported to be a spectacular path. We climbed out of the valley and skirted around the shores of Loch Dee, looking atmospheric with the low cloud shrouding the shores. At one stage we startled a deer which bounded across the path in front of us before disappearing at high speed into the depths of the forest. As the light began to fade we found ourselves looking for a site to pitch our tents but were continually thwarted by the saturated ground and Tussock Grass, it grew darker still and we eventually decided we’d no option other than to seek a spot in amongst the dense ranks of Pine Trees. Headtorches on we struck out into the serried ranks eventually finding a flattish hillock just wide enough for two tents. The accumulated matting of many years of pine needles made for a surprisingly comfy bed and not until I was awakened by the distant rumble of quarry vehicles, (which in my sleepy state I was convinced was a tree strimmer heading straight for our camp), was my sleep disturbed!
We climbed out of the forest and onto the tussocky slopes of Darrou, somewhere on those slopes I lost my main waterbottle (though thankfully I had a spare), I suspect it may be some time before anyone retrieves it, there was little sign the area sees much traffic. After much huffing and puffing we made the ridge line and continued forth in cloud and high winds over the peaks of Little Millyea, Meikle Millyea, Milldown, Millfire and eventually onto Corserine, the highest peak of the Rhinns of Kells. In spite of the fierce winds and inhospitable terrain we saw a Ring Ouzel and a Peregrine but no sign of other human life. Our map showed a forested descent, but once we hit the lower ridge for some superb views below the clouds it became clear to us that the slopes had recently been cleared, indeed it was here we saw our only other human over the three days driving a bulldozer on the recently denuded slopes. It was tough underfoot but we made the valley floor and after watching another deer made the long, slow ascent to the Nick of the Dungeon. I’d heard many words of praise for Loch Enoch (Icy loch) as a wild camping spot with it’s white granite sand beaches and surrounding heights, but the clouds were dropping, the ground was saturated and it was needs must. We crawled into our tents, cooked up some tea and hunkered down for a wild night of wind and rain. It was the first time my Wild Country Hoolie tent had been tested, after the sad demise of the Vango Banshee, and it stood up admirably. It also has the advantage of being exceptionally spacious for a backpacking tent and I was glad of the extra room as I tried to air/dry off kit ahead of our last push up the Merrick the next morning.
Tuesday dawned grey, but as we picked our way round the loch shore we saw a single glimpse of sunshine and blue sky and a taste of how spectacular Loch Enoch might look under Summer skies. However, by the time we started to ascend Redstone Rig, it was back to cloud, mizzle and grey as the loch disappeared beneath us. Merrick, like Corserine, has a large grassy plateau as a summit and it was blowing a gale up there so we descended quickly down the tourist path over Benyellery and back down into the valley.
So, do I have the taste for Scottish adventure now? You bet. It was rough underfoot, wet and cloudy, but it felt remote and wild and I have never gone 48 hours in the Lakes or Snowdonia without bumping into another walker. My appetite has definitely been well and truly whetted!

4 thoughts on “Walking and wild camping in Galloway”