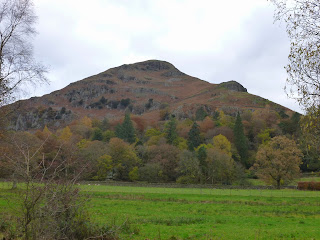 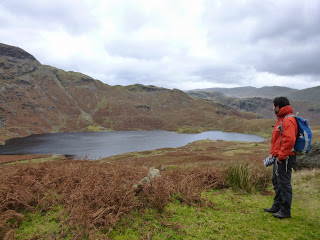 After the sultry Caribbean heat of Cuba, a chilly Wednesday in November was just the short of re-introduction to the Lake District I needed….(honestly…). Al was finally free of weddings, honeymoons and DIY and we got an early start and arrived in Grasmere before 9am. In fact, we were too early, I spied a previously unnoticed snapped lace and we had to knock on the door of the not yet open “Mountain Warehouse” to obtain a new one, so big thanks to them!
We left Grasmere, heading out into Easedale and following the steady, pleasant ascent alongside Sourmilk Gill until we reached Easedale Tarn. Helm Crag and the valley below were painted with Autumnal rust and we passed few other walkers. Apparently in the 19th Century this was such a popular spot that a refreshment kiosk was established there, much as a warming cup of coffee might have taken the edge of the wind, I think I prefer it in the natural state in which we found it. We followed the steepish path up to Eagle Crag before meandering back and forth across the tops and eventually making our way up to Sergeant Man for magnificent views down to Stickle Tarn and Pavey Ark, the first time I’d seen these two Lakeland icons from this angle. We could see the ever darkening clouds scudding towards us so hotfooted it across to Birks and then onto Brownrigg Moss before making our way along the ridge towards Helm Crag. The cloud stayed pretty high but as we reached Gibson Knott the rain hit and it was increasingly hard to imagine that only ten days before I’d been in the Sierra Maestra gently melting under a tropical sun! Not sure which I preferred more though, there’s something life affirming about the smack in the face of gale driven rain 🙂
We picked our way down from Helm Crag and followed Easedale back towards the village for a stop in at the Gingerbread shop and a welcome, warming brew. It felt really good to be out in the Lakes again after a brief hiatus and I now feel broken in for a good Winter of walking in the many and varied conditions the Lakes can throw at us!