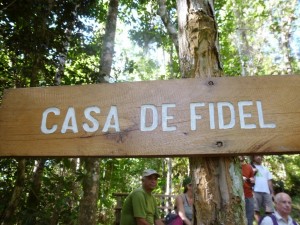 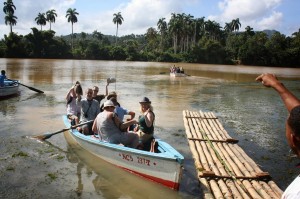 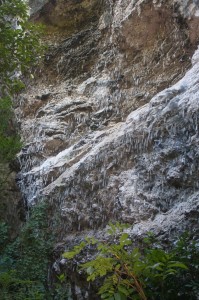 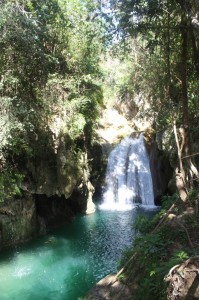 Before this trip when I thought about Cuba the first things that sprung to mind were Salsa dancing, rum, American cars and cigars, walking wasn’t near the top of the list, luckily I am now able to add it after spending two very varied weeks in this curious and fascinating country. We went on three different walks during our time in the Caribbean and whilst none of them were overly challenging they all provided different features of interest and explored different facets of the country and it’s natural and actual history.
Walk one set off from a small hamlet just outside the town of Baracoa, Cuba’s first capital and the site where Colombus landed in 1492 and is reported to have said, “This is the most beautiful land that human eyes have ever seen”. The landscape is still incredibly lush and as our guide led us deeper into the jungle the sense of exploration grew. We passed Almond trees, Mahogany, Banana Palms and Cocoa trees, all alive with birdlife from the tiny Hummingbirds to Red Crested Woodpeckers. Pigs grunted and foraged in the leaf litter and a dazzling azure blue snake shot across our path, Egrets sat along the river bank and occasionally a local man dangling a lethal looking machete from his belt would meander past us. It was sweaty, humid work with the temperature in the 30s and little breeze but eventually we reached the broad banks of the River Toa. Heavy rains had put pay to our plans to have a dip but we were rowed across the span of the fast flowing waters and treated to the Cuban equivalent of a fireside pint in a Lakeland pub, a rum and sour orange cocktail served in a hollowed out fruit and sipped under a canopy of palm fronds…Might not hit the spot after six hours in the clag on Great Gable, but did very nicely under the circumstances.
Our second walk was the one that filled me with the most excitement, a hike in the Sierra Maestra mountains that would take us to Fidel Castro’s jungle hideout from which he launched the Cuban revolution. Castro and Che Guevara are inescapable presences on the island and it would be impossible to try and understand the current circumstances without exploring the history of the revolution. We left Santa Domingo, a tiny hamlet strung along a clear stream and entered Turquino National Park, named for the highest peak on the island. The road curving up to the start of out trek is the steepest in Cuba and was genuinely terrifying, but our driver coaxed his jeep to the top of the hill and we set off towards the “Comandancia la Plata” site. Turquino soon disappeared into the cloud as our path hugged the edge of the valley dropping and rising on muddy footpaths dotted with butterflies and lizards. We stopped as Casa Medina, the site of the farmhouse of the peasant family who allowed Fidel and his men to hideout on the land, where there were piles of coffee beans drying in the sun, spectacular views down the valley and a garden dedicated to five Cuban agents being held on spying charges in the USA, in Cuba, politics is never more than a heartbeat away! Another half an hour and we were entering the site itself, though not before spotting the Trogon, Cuba’s national bird, arrayed in the colours of the flag. The site is very evocative and with an imagination like mine it took little effort to picture the revolutionaries plotting the downfall of Batista and his regime and espousing Marx and Lenin to the peasantry. The walk back was along the same paths and led us back to the starting point with further views of Turquino.
Our final walk was in “Parque El Cubano”, a small, popular reserve just outside the beautiful colonial city of Trinidad. Another winding park took us along a river bank passing termite mounds, an enormous colony of wasp nests hanging from a cliff face and with frequent views of Kingfishers to an old peasant settlement now being used as a lodging post for park staff. It was another twenty minutes from there before we reached the spectacular Javira waterfall. The waterfall is spectacular and the plunge pool was a perfect spot for a cooling dip, behind the waterfall was a deep, limestone cave full of bats which added a bit of interest to my splashing around!
These walks were not overly taxing but each provided a different perspective on a country that is often seen as a one dimensional political outsider and where the majority of visitors cosset themselves away in the all inclusive resorts that dot the coast. Walking in Cuba may not have taken off just yet but the potential is undoubtedly there!