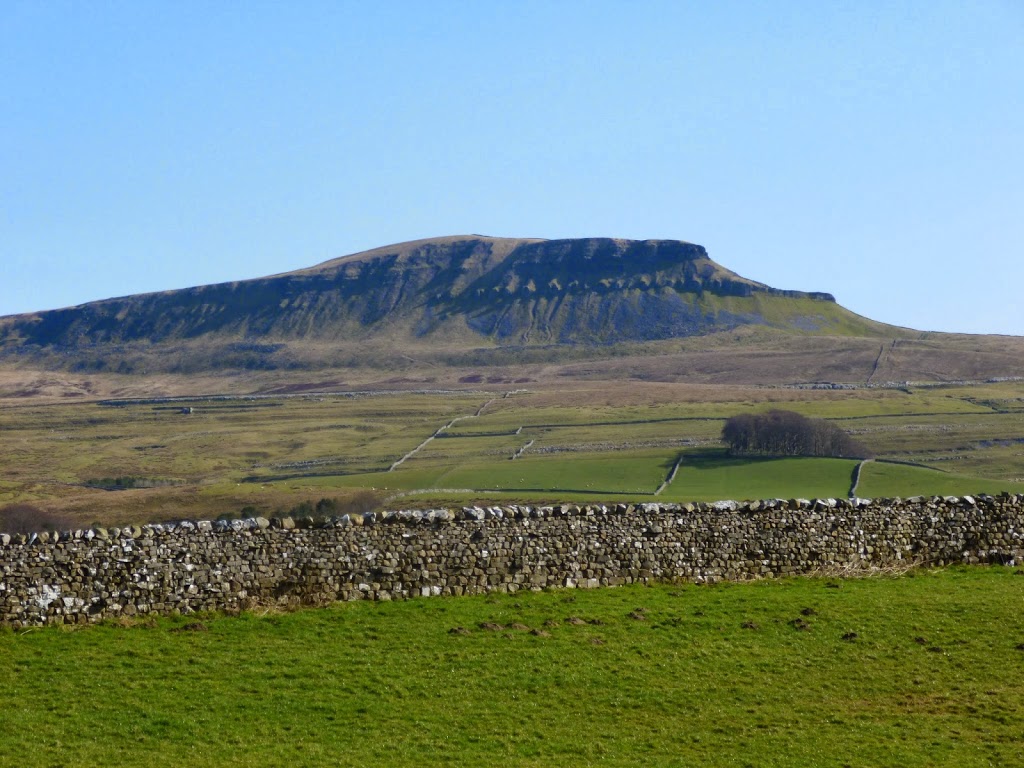 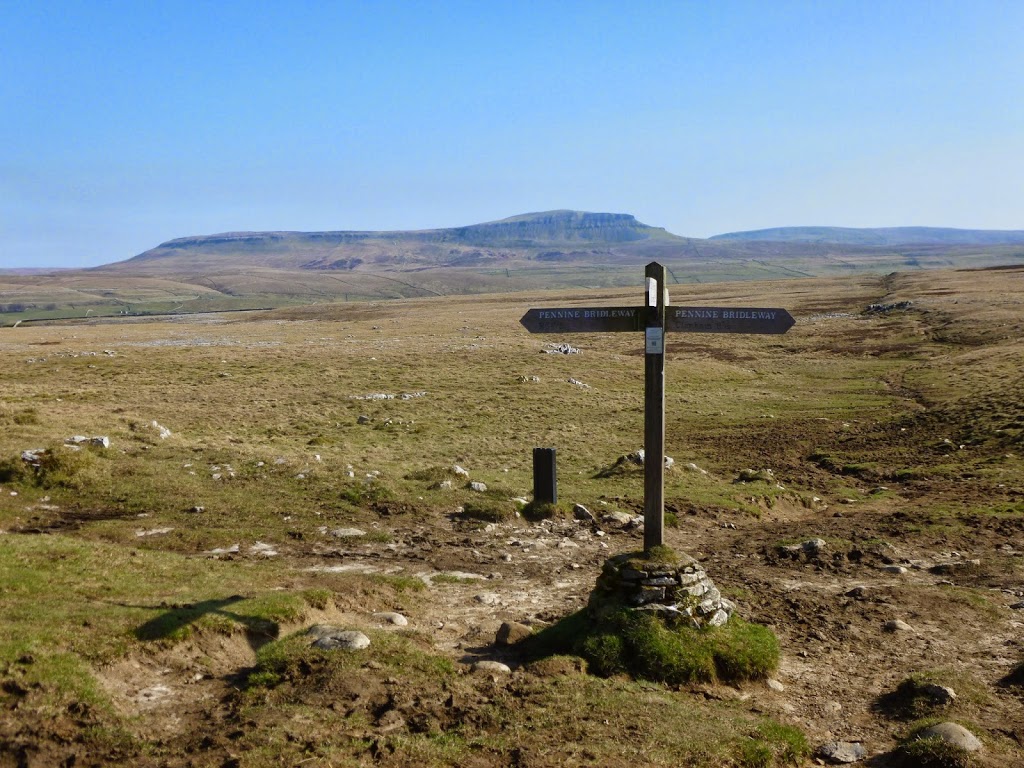 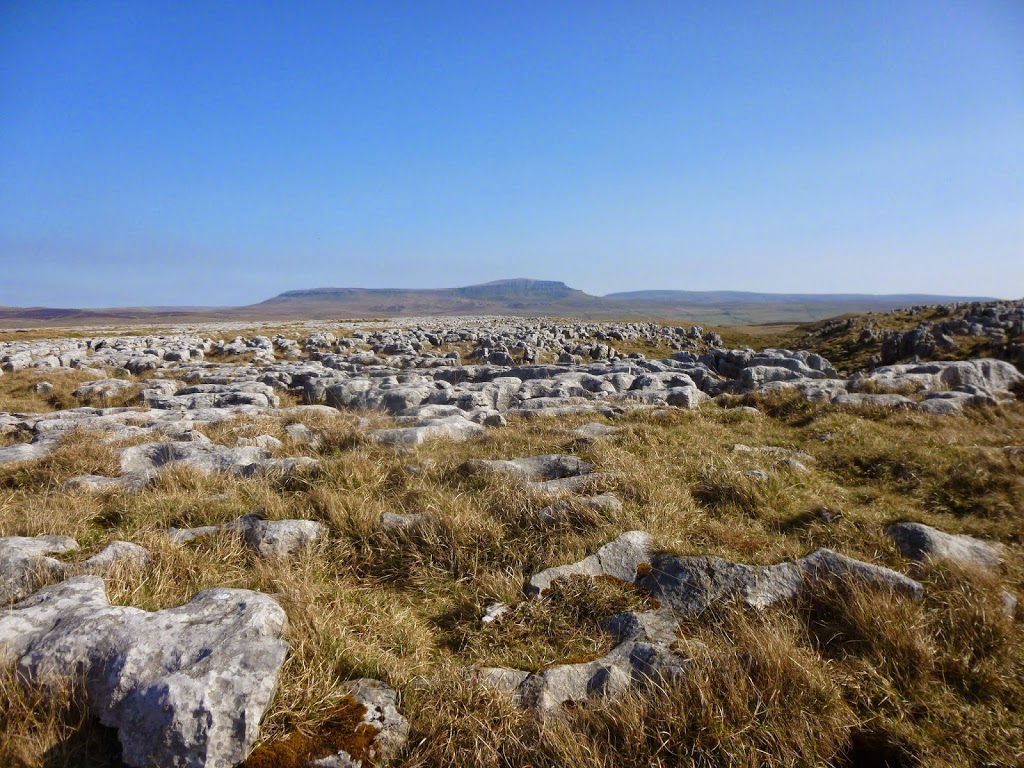 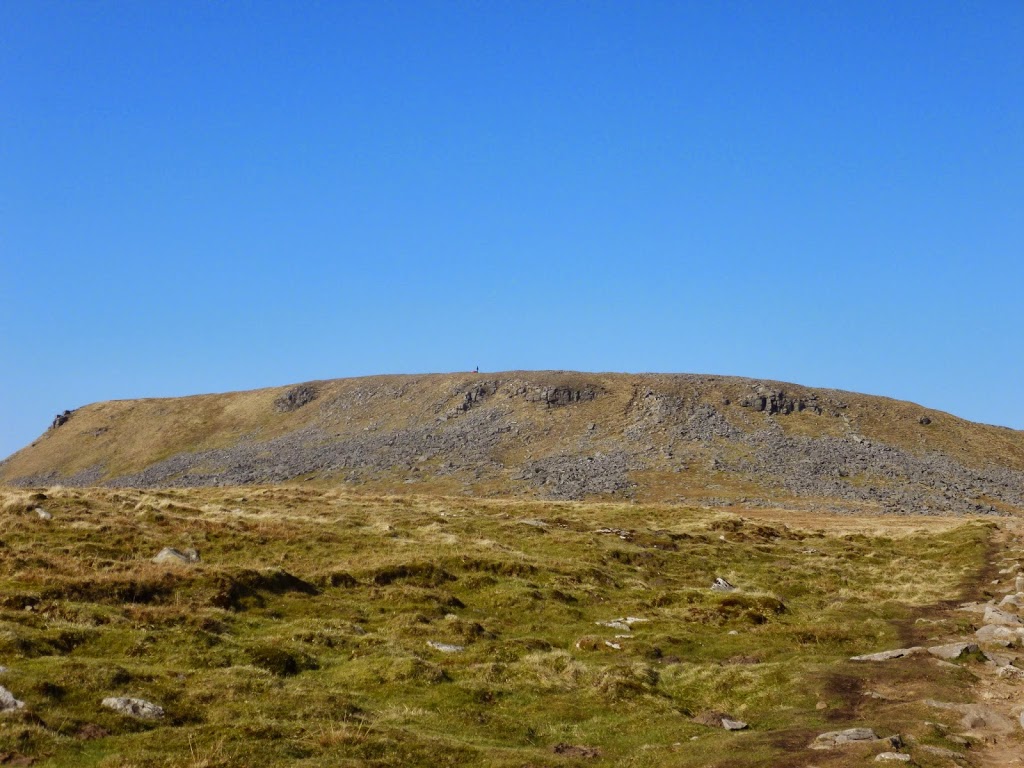 Ingleborough will always hold a special place in my heart, for it was after I had coerced/cajoled (depending on who you listen to) Ruth up to the summit on a brutally wet day that turned to snow as we reached Little Ingleborough, that I decided she was the girl for me! I proposed a few hours later sitting by the fire in the highly recommended “Game Cock Inn”, Austwick, where the excitable French proprietor, Eric, bought us a bottle of champagne to celebrate with! In spite of this tale of romance and adventure I’d not been back since and was looking forward to enjoying the early Spring.
On our previous visit we’d taken the route from Clapham but I had decided to start on the other side and ascend from Horton-in-Ribblesdale, more commonly used to ascend Pen-Y-Ghent. The bright sunshine and warm temperatures were slightly disconcerting and most un-Yorkshire like as I passed by the picturesque station and picked my way along Sulber Nick flanked by impressive limestone pavements. The views back to Pen-Y-Ghent and ahead to Ingleborough and Simon Fell were expansive and whilst there were a fair number of other walkers we were well spaced out. I would imagine on a weekend during the “3 Peaks season” this path would see an awful lot of traffic. I passed a ruined shooting hut and the area of marsh and shake holes known as “The Allotment” and eventually cut off the path and climbed up on to Simon Fell where I had a solitary lunch with hazy views of Whernside. It was another 15 minutes or so and after a short, sharp last pull I was on the vast plateau that is the Ingleborough summit. The summit has been the subject of much conjecture. For years it was considered to have been an Iron Age hill fort but recently archaeologists have come to consider that the ruins might in fact be Bronze Age and related to ritualistic use, either way it is easy to see why people were (and are) drawn here, the 360 degree views are wonderful. There is plenty of furniture up here; A trig point, a well established windshelter, a cairn or two and the ruins of a tower built in 1830 that was partially destroyed by drunken revellers on the occasion of the celebration of it’s completion!
The summit was busy so I didn’t stay long. I headed off South to Little Ingleborough (scene of much false summit heartache on excursion one) before making my way down to the magnificent Gaping Gill. This 98m deep pothole swallows Fell Beck and is the tallest unbroken waterfall in England and one of the largest known underground caverns in England. It’s terrifying and magnificent in equal measure. Twice a year members of the public can pay to be winched down into the cave itself, definitely something on my bucket list! Leaving Gaping Gill I made the path at Long Scar and then back across the bleakly named and atmospheric Thieves Moss, a lonely spot where you could just imagine a highwayman or brigand lurking! The path eventually led me back to Sulber Nick and from there it was a gentle dander back down to the village.
Whilst my first visit to Ingleborough will always remain the most memorable for obvious reasons, this was a cracking day out in beautiful weather and it’s only a matter of time before I head back to this scenic part of the world.