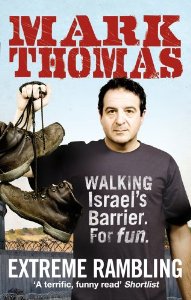 The act of walking has over the years been not only a balm to the troubled soul but also an act of political defiance. The very fact that protestors the world over go on protest marches puts the act of pedestrianism in the realm of politics, not to mention events such as the Kinder Trespass which became the catalyst for the free access movement which has won us so many freedoms today.However, for the majority of us, I don’t think we consider the act of walking to be anything overtly political. When I find myself tucked under the Wain Stones sheltering from a gale or dipping my feet in Angle Tarn on a hot Summer’s day, I feel a million miles away from the concerns of my normal life and, usually, all the better for it.

Mark Thomas however is not a man to shy away from expressing his views and his idea to walk the length of the Israeli West Bank barrier cannot really be seen as anything other than overtly political. The route the barrier takes is over 400 miles long, so the walk is a not insignificant undertaking, and it is an undertaking that is made considerably harder by the political situation and inevitable tensions the walkers encounter on both sides of the barrier. Thomas walks with his friend and cameraman, Phil, and an assortment of translators, fixers, guides and oddballs. He interviews Israeli settlers, Palestinian farmers, NGO workers, scrap metal dealers and those striving for peace from both sides of the divide. He is pelted with stones, rained upon, hailed upon, sunburned, tear gassed and arrested, but continues stoically on. He meets members of the Palestinian Ramblers Association and goes for a walk with the British consul general and he experiences a harsh, scarred landscape but one that is still regularly capable of taking his breath away.

Regardless of your views on the situation, and Thomas’s views are clear from the first paragraph, one of the very real things that comes out of this book is how by walking you are forced into contact with the land and the people on it. On a linear walk such as this it is impossible not to meet people, not be confronted with the reality of what we as humans do to the land and each other, and to ponder the notion that travel that is not undertaken on foot often removes us from the very essence of the place we are there to see.