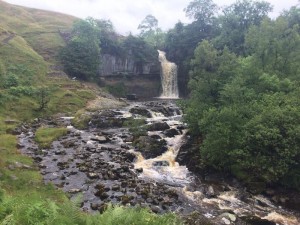 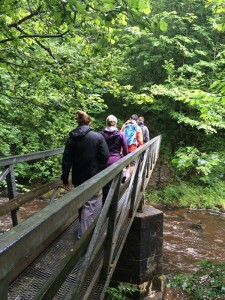 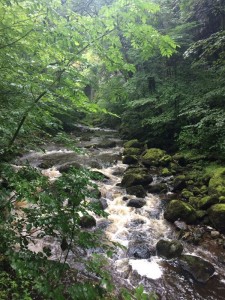 The area around the Three Peaks of Yorkshire holds fond memories for me. It was after a day on Ingleborough in the snow of Easter that I decided to propose to my wife in “The Game Cock Inn” in Austwick, the fact she said “yes” may mean that my feelings are tinged by irrational feelings of excitement. We have also climbed Pen-Y-Ghent together and Whernside is on the list as a Mr and Mrs must do! The majority of people camping at the basic but well situated Holme Farm campsite in Horton-in-Ribblesdale were intending on doing all three of these peaks in less than twelve hours, many made it, some did not…..the weather didn’t help!

Our group decided on something a little more sedate given that two members were pregnant and not one of the three peaks was visible as we ate our breakfast. The Ingleton waterfall trail is a privately owned route that follows the River Twiss through a beautiful, steep sided, heavily wooded valley that passes a number of spectacular waterfalls (one of the obvious advantages of the torrential rain we endured during our walk). Pecca Falls was the first one we came across, a tumbling series of cataracts cascading through narrow channels in the rock. The next major fall is Thornton Force, a favourite of landscape artist William Turner and on a sunnier day it would have been an almost picture perfect waterfall. The path led on past a very forlorn looking ice cream van before dropping back down into Baxenghyll Gorge, at this stage the rain redoubled in it’s efforts and we were glad of the shelter provided by the woodland that fringed the steep sided ghyll. The River Doe continued to tumble down the valley and over Snow Falls before we emerged back into the heart of the village of Ingleton desperately in need of a hot cup of coffee and a slice of cake….