Walking the Derbyshire dales from Tideswell

I’d not done much walking in the Derbyshire dales recently in spite of having a genuine affection for Tideswell. It’s a fantastic little town with pubs, chippies, cafes and an excellent bakery all sitting in the shadow of “The Cathedral of the Peak” , the parish church of St.John the Baptist, a magnificent 14th Century edifice. I parked outside the church and made my way out of the village picking a path through the wild flowers and dry stone walls and then on through a chest high field of Rye. The landscape was pure White Peak, the rolling hills, the tree lined dales and the stone walls all sat under a blue sky studded with the odd cotton wool cumulus. Wagtails and Pippits flitted hither and thither and clouds of Small Tortoiseshell lifted and floated down the path ahead of me. I eventually reached the hamlet of Miller’s Dale on the banks of the River Wye and resisting the allure of the idyllic looking “Angler’s Rest” pub headed into Monk’s Dale. After a spot of lunch in the sunshine it was into the Tolkeinesque forest on the valley floor where slippery rocks made the going tough and every branch was decorated with lush green moss.

I followed another walled path to Wormhill, another tiny village and alleged to be the site where the last Wolf was killed in England in the fifteenth century. It’s also known for the memorial to James Brindley, a pioneer canal builder during the industrial revolution and one of the leading engineers responsible for the construction of The Bridgewater canal. I cut down into Chee Dale and after a while watching the fish in the crystal clear water I climbed the steps passed the abseilers on the Cheedale viaduct and headed down the abandoned railway line of the Monsal Trail crossing the Wye on a slightly vertigo inducing viaduct sat in the shadow of the huge Lime kilns that once dominated the area. Leaving the trail I made my way back through Miller’s Dale before climbing away from the B6049 and making my way across fields of rough pasture and back into Tideswell.

On a day like today it’s hard to think why the Derbyshire dales are not as well known as their Yorkshire equivalent. The landscape might not be as spectacular as the Dark Peak but it is quintessentially English. A land of meadows, stone walls, tree lined rivers and tiny farming hamlets. It really is worth a visit. 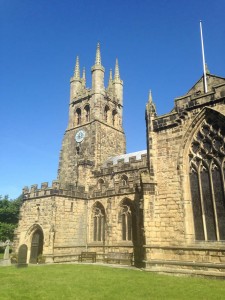 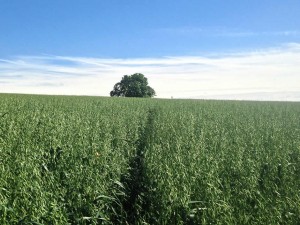 2 thoughts on “Walking the Derbyshire dales from Tideswell”