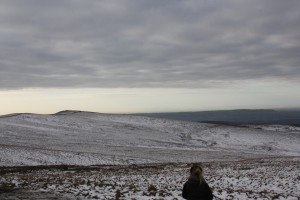 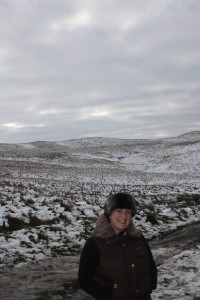 After an Irish Christmas with the in-laws and a ceaseless flow of food and drink shaped hospitality, my belly had come to resemble something akin to that of Father Christmas himself. The extra stone and a bit of Turkey, Mince Pies, Guinness, Stilton, Port and chocolate needed to be addressed but the thought of a long, demanding, unyielding climb filled me terror, so I did what I have so often done on occasions previous and rounded up Mrs H before heading along the A6 to Disley and Lyme Park.

The snow that was noticeably absent in Manchester was far more evident in the grounds of this enormous stately home and the area surrounding the car park was  full of youngsters, sledges, snowmen and shouts of festive glee. Having something more of the Scrooge about me we left this Winter wonderland behind and followed the well trodden, muddy path through Knightslow Woods and out on to the snow flecked open moorland. A slippery, icy climb led us past a herd of deer being fed by the estate workers and on up to the blustery tops beneath the Bow Stones. It was chilly on the tops but as we moved on the views of snow capped Kinder opened in front of us and behind us were good views of the similarly Wintery Shutlingsloe and Shining Tor. We crunched through the brittle snow handrailing the wall until it eventually reached the corner of the woodland and we then turned and slipped and slithered our way back towards the house and the hordes. No more than three and a half miles, but at least one mince pie must have been exorcised by the effort and it’s got me in the mood for thinking about some seriously excellent walking in 2015! Happy New Year everyone! See you in 2015 !!!!!