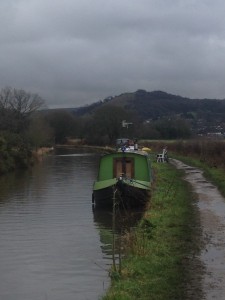 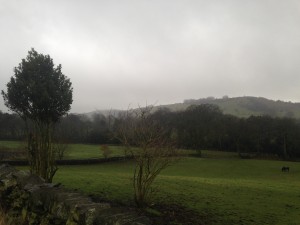 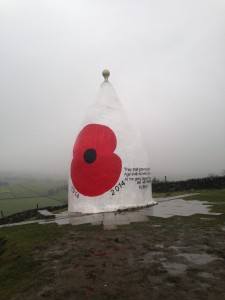 The Gritstone Path is a 35 mile footpath that winds its way from Tegg’s Nose, just outside Macclesfield to Kidsgrove and crosses some of Cheshire’s most spectacular countryside. Over the last year or two I have covered various sections of it and on a blustery and wet Tuesday morning I used it to kick off my walking schedule for 2015. I started with an ascent to White Nancy, the folly that sits at the Northern end of the Saddle of Kerridge. It was built in 1817 by John Gaskell to celebrate the British victory in the Battle of Waterloo and over the last couple of years has been adorned with paintings celebrating the Queen’s jubilee and the Olympics. The current decoration is of two poppies and a commemorative poem marking the centenary of World War one.
I dropped off the top back onto The Gritstone Trail and squelched through the mud in the driving rain until I reached Oakenbank. The rain was unabating as I made way up past Berristall Hall with it’s collection of ponds and ducks before reaching Bakestonedale Moor where the cloud dropped ever lower and the stark outlines of the leafless trees took on a distinctly ethereal and somewhat ghostly feel. The path flanked the huge rocky gouge of Moorside Quarry and then continued past Birchencliff ,where I saw a Red-Legged Partridge and a Nuthatch, before I attained the North Cheshire Way which I followed as far as the Cheshire Ring Canal where the rain eventually stopped.
The Cheshire Ring is a 97 mile circular route which takes in sections of six different canals in the North West and is a popular circuit for canal boat holidays. I have mentioned it before but there is something pleasing about towpath walking. Keep the water on your left or right depending on your direction and you can’t go far wrong. It can lead to contemplative walking where the simple act of putting one foot in front of the other becomes pleasingly automatic and the mind can wander in a way that is impossible on the rougher terrain of the hills and moors. Anyway, I followed the path back for approximately three and a half miles passing some of the old mill buildings now converted into offices and workplaces before reaching Bollington where a short spell of road walking took me back to my car and a welcome set of dry clothes. It feels good to have the first 10 miles of the year under my belt.