Walks in the Derbyshire Dales 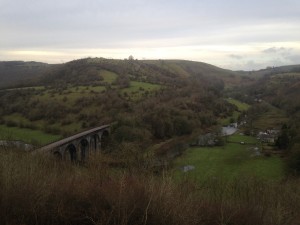 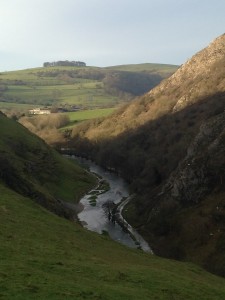 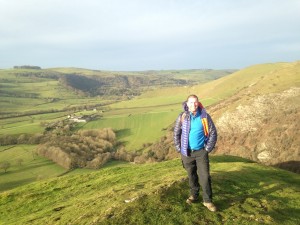 I met Nathan when we were both Mountain Leader trainees and we have remained good walking buddies ever since and had some decent adventures on hills from Crib Goch to Galloway. He now lives the other side of Chesterfield which means he is ideally positioned for the White Peaks and with us both having a bit of free time it seemed like a good opportunity to get out in a part of the Peak District I have explored less often.

Monday was wild, wet and windy so we decided that The Monsal Trail might make a suitable expedition without any fraught navigational decisions or hills off which we might get blown. The Trail itself is 8.5 miles long and follows a section of the former Manchester, Buxton, Matlock and Midlands Railway. The line was built in 1863 and eventually closed one hundred and five years later in 1968. We started off at Monsal Head and with the conditions as we left the car being particularly atrocious we headed down to the valley floor and followed the River Wye until the rain and wind had subsided. We climbed back up onto the trail and followed the line of the river from our elevated position. As the Wye wound it’s way through Miller’s Dale we passed through the Cressbrook and Litton tunnels which again afforded us a break from the precipitation. Many of the old mill buildings have been converted into very attractive blocks of flats including the notorious Litton Mill. The mill was set up in 1782 by Ellis Needham and utilised child labour in the form of orphans shipped out from London and treated appallingly. Needham eventually went bankrupt in 1815 and I am certain not many tears were shed. We eventually made it along the route as far as Miller’s Dale station, once the largest on the line and a vital cog in the Manchester to London route. After lunch we meandered back along the line this time taking the high route over the tops of the tunnels where we got buffeted about by the wind, saw a hunting Kestrel and got some magnificent views of Cressbrook Hall before eventually climbing back up to Monsal Head and the end of the day’s walking. Before we headed back we made a short detour to High Tor above Matlock Bath where there were some great 360 degree views and the intriguing remains of ancient lead mines which looked as if they’d be worth further exploration (adherence to access and signage permitting 😉 ).

Tuesday morning dawned with blue skies and crisp air and we headed down to the main Dove Dale car park and from there across the famous stepping stones and onto the lower slopes of Thorpe Cloud. A short, sharp hike and we were atop this limestone hill, part of an ancient coral reef and famous for it’s appearance in Russel Crowe’s 2010 film “Robin Hood”. We descended down to the Limestone Way which we followed through Tissington before hitting The Tissington Trail which runs along the course of yet another abandoned railway. The elevation of the trail gave some great rural views before we reached Alsop-en-le-Dale where we exited the trail and walked straight into a snow storm blowing in from the West. Nab Dale provided us with some shelter and it wasn’t long before the path had dropped us back down to Dove Dale just beside the impressive caves of Dove Holes. Evidence suggests the caves were used as a shelter by hunters as early as 13,000 years ago and we made good use of the overhanging rock to get out of the rain. We followed the River Dove made famous by Izaak Walton’s legendary treatise on fly fishing “The Compleat Angler” before the huge natural rock arch in front of Reynard’s Cave caught our eye and a short scramble later we were squeezing in and out of narrow clefts in the rock and then up onto the top of the alarmingly narrow arch. The cave is allegedly named for a brigand who used it to hide out and a few years ago a stash of Roman and Iron Age coins were discovered secreted there. We were out of luck as regards hidden loot, but descended back to the path and made our way along the riverbank back to the stepping stones and on to our start point. Dove Dale is truly worth a visit, the vast limestone columns and cliffs, Dippers and Mallards in the stream and the steep sided valleys giving plenty of interest and a slightly pre-historic feel.