Walking Bleaklow in the snow 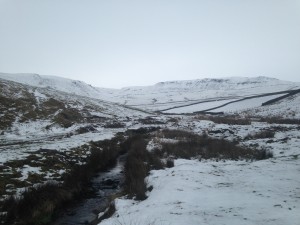 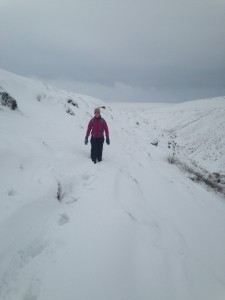 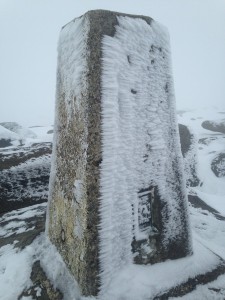 There is something special about walking in the snow, it alters the landscape of the Dark Peak, smoothing off the edges and concealing the dark peat bogs beneath a blanket of white. Last year was a poor one for those of us who like to walk in the white stuff but the opportunity to get out and enjoy a little early in 2015 was too good a chance to miss. I was walking with Jo who has long been a good friend to Come walk with me and was eager to experience some authentic Winter conditions.

We set off from Old Glossop along Doctor’s Gate. My OS map still informs me that this is the route of an old Roman road, but a smart new piece of signage at the start of the path informed me that this theory is no longer accepted and the path, whilst old, is more likely to have been a packhorse route rather than one used by Roman legionnaires. The slopes of Coldharbour Moor and Bleaklow itself were dotted with snow but whilst snow sat on the path it was fairly easy underfoot until the path began to climb towards Urchin Clough and the end of the spectacular gorge that is Crooked Clough. As we followed the line of Crooked Clough we hit the first drifts and our progress, whilst determined, notably slowed as we encountered thigh deep snow and a bitingly cold wind. None-the-less we reached the waterfall at the top of the clough and then meandered our way up the slopes of Gathering Hill before reaching the trig point at Higher Shelf Stones just as the cloud dropped, the snow started and the visibility all but disappeared!

We tucked ourselves in amongst the stones and grabbed a quick coffee and refuelled with Jaffa Cakes. The original plan had been to continue along the edges towards Yellow Slacks and drop down there but the wind and ever worsening low cloud meant we ended up deciding that discretion was the better part of value and we descended on a bearing back in the direction we had come and retraced our steps back towards Doctor’s Gate. It was both exhilarating and eerie being stood on Bleaklow in those conditions, we saw more Mountain Hares than other people and the headlights of the cars as they struggled over a blizzard blasted Snake Pass appeared as tiny distant pools in the murk. These are not ideal conditions for beginners but if you are well equipped and competent it’s an excellent opportunity to practice skills and have the hills almost to yourself!