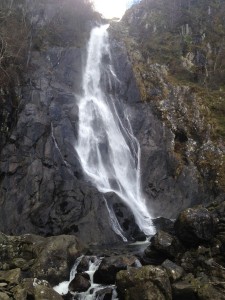 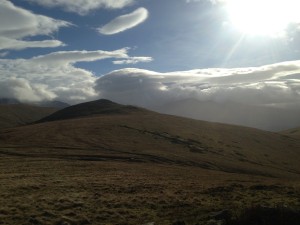 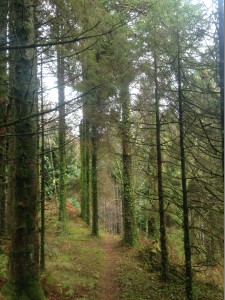 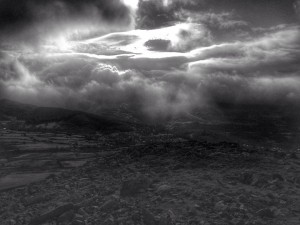 There are some places you come across and find yourself thinking “Why have I never even heard of this place before, let alone visited”, that was exactly how I felt as I came face to face with Aber Falls. I’d parked in the village of Abergwyngregyn and made my way along narrow country lanes following the route of Afon Aber. My route then left the road and continued to follow the line of the valley as it gradually climbed towards the falls. Being half term the path was busy with other walkers, but even the (smallish) crowds couldn’t take away from the grandeur of the falls where the Afon Goch drops 120 feet over the sheer rock face. I left the Falls on the North Wales Path and crossed into open country at the foot of the valley below Moel Wnion. It was rough, pathless walking as I contoured round the hillside with deep gouges in the land necessitating the occasional diversion and spectacular cloud formations looming ahead.  Eventually I rounded the hill and was greeted with the sight of the spectacular sheepfolds that flank the lower slopes of Gyrn. After grabbing a sandwich on the summit, where a small shelter provided welcome respite from the buffeting wind, I continued across the Llefn and onto Moel Faban. Moel Faban is dotted with cairns and ruins which are thought by many to date from the Iron Age. There is certainly plenty of evidence around and with the cloud low and the snow topped Carneddau in the distance it was a very atmospheric spot for a second lunch. In the distance the mass of back lit cloud over the quarry beyond Bethesda made it look like something out of Tolkein, a Welsh Mordor if you like.

I followed the path that skirted below Gyrn before slowly angling up the valley watching a farmer and team of sheep dogs en route. The clouds kept scudding past and a threatening looking front loomed in the distance but as I climbed onto the summit of Moel Wnion it was blue sky over head and great views across the Lavan Sands towards Beaumaris. The descent was steep and hard on the knees but I eventually made my way through wind blasted Hawthorns and fields of sheep and as I followed the North Wales Path once more it led me back into the village after a very satisfying day’s walking.

An overnighter which consisted of a very comfortable night in Llanberis YHA followed by a good breakfast at Pete’s Eats led to a seriously grim morning, a melange of high wind, low cloud and rain. I decided the protection of some trees might be the order of the day and headed for the forest outside Betws-Y-Coed. I set off on the Cae n’y Coed trail which carved it’s way gently through a mixed forest before opening out on a spectacular viewpoint looking towards Moel Siabod. As I followed the broad tracks through the trees I came across my first ever flock of busy, chattering Siskins, beautiful, yellow-green finches of an obviously gregarious nature. They were the highlight of what was a grand little route and one that kept me out of the clag and cloud that was dogging the tops. On my way back to Manchester I stopped at the Welsh Food Centre and filled a basket with some excellent locally produced fare.