B29 Superfortress crash site on Bleaklow

Walking with; Helen from Bradt Guides 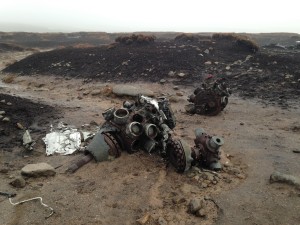 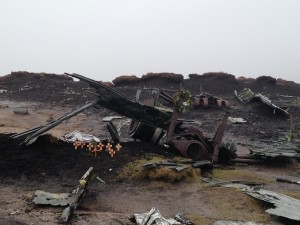 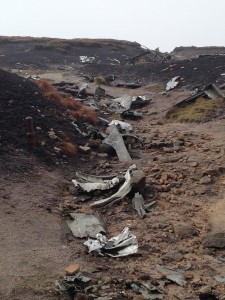 The venerable publisher of travel guides, Bradt, have over the last couple of years been bringing out what they call “The Slow Travel” series covering a large part of the United Kingdom. Their website describes the ethos behind this series as “a sedate, measured approach which is all about getting under the skin of a place so that you leave feeling as if you really know it and haven’t just scratched the surface.”. This is an ethos that really chimed with us here at Come walk with me so when I was contacted by Helen Moat who is writing the Peak District edition I’d agreed to meet her and show one of my favourite Peak District hills, Bleaklow. Helen was particularly keen to visit the plane wreck of the B29 Superfortress that crashed, with 13 lives lost, near High Shelf Stones in November 1948. The site is remarkably well preserved and with typical Bleaklow weather veers from poignant to eerie, but it’s an interesting spot and one where I have always found people to be respectful and serious rather than voyeuristic.
We met in Glossop where Helen conducted a short interview asking me about the Peak District and what it was that particularly appealed to me about it before we made our way up to the point on The Snake Pass where The Pennine Way crosses from the Kinder Plateau onto Bleaklow. The snow was falling as we headed out onto Britain’s oldest long distance path which turns fifty this year. It was coming down pretty hard, but the big, wet flakes weren’t settling and the visibility was reasonable by Bleaklow standards. Heading “off piste” we crossed the top of Crooked Clough above the waterfalls and headed towards Higher Shelf Stones putting up Grouse at regular intervals and searching in vain for an elusive Buzzard whose “mew” drifted through the snowy air. We reached the trig and moved onto the crash site which covers a huge area and is remarkably well preserved for a wreck that occurred nearly seventy years ago. Even though the cloud had lifted, the poppies, remembrance plaque and stark, scarred wreckage strewn landscape made for a sombre visit.
The remains are of the plane “Over Exposed” which was a surveillance plane used by the USAF and which had been used as an observer at the Bikini Atoll nuclear tests. It was under the command of Captain Landon.P.Tanner and was flying on instruments only in thick cloud when it came down early and struck the plateau resulting in the loss of all crew members. It is one of the many plane wrecks that litter the tops of the Peak District but this is probably the most significant and best preserved.
We left the wreckage and retraced our way back towards Crooked Clough where we took the narrow path contouring along the hillside. It was only when we made our way back up on to The Pennine Way that we saw our first other walkers of the day. It was great to meet Helen and hear a bit more about the guide book and the ethos behind it, not to mention some of the other Peak District gems she’d uncovered during the research. All that’s left now is to sit back, wait for publication and enjoy my five minutes of fame 🙂