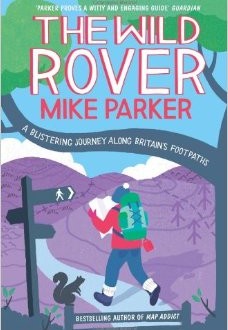 The Wild Rover by Mike Parker 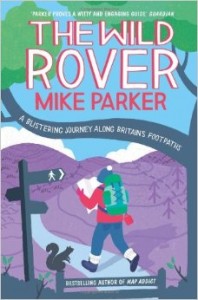 On his webpage Mike Parker has a quote from The Daily Mail exclaiming “He’s gay! He’s liberal! He’s borderline pagan! He’s even sort of Welsh!” This introduction won me over straight away and after reading this exploration and celebration of the nation’s footpaths and rights of way I might also add “He’s very funny……”. In short he seems very much like a man it would be very pleasant to go for a wander with, and, if you can’t, the next best thing might be to read about his own wanderings…
The book starts in that most neglected of walking environments, our own back yard. Parker admits to having been horrified at the erection of a series of footpath signs on his local patch, signs directing the non-local hordes to pathways and thoroughfares once the preserve of locals. This episode inspires him to investigate just how many paths and rights of way exist within a 3 mile radius of where he lives, he is stunned by the number and so his journey begins. The book blends research and narrative in equal measure and touches on the thorny issue of access rights from the trespassers of the Northern cities to the more recent battles with Nicholas Van Hoogstraaten. Holy cows are regularly attacked, the Kinder Scout trespass was a triumph of PR over substance and the Wainwright Coast to coast is abandoned after two days in favour of a journey across Wales, but it’s all done in the best possible humour.
Parker roams far and wide across the country from The Ridgeway and Thames Path in the South to The Pennine Way and Morecombe Bay path in the North. The latter provides one of the most thought provoking passages in the book where Parker explores whether just because a right of way has existed since time immemorial it should be marked on the map (a relatively recent development anyway). The path that crosses Morecombe Bay is deadly and yet there it sits a bold green dotted line marching unhindered across the sand. I ended the book thinking that those on the polar opposites of the debate, governed by a stubborn insistence that on the one hand “none shall pass” and on the other “this path must be marked even if it hasn’t existed on the ground for 50 years” were so eaten up with their own prejudices and concerns that the ship of common sense had long since set sale.
Mr Parker however has succeeded in winning me over with this humorous, well informed, thoughtfully researched and thoroughly readable book which has reminded me that in spite of the odd imperfection here in Britain we don’t know how lucky we are to have a system of public footpaths and rights of access that much of the world can only dream of.