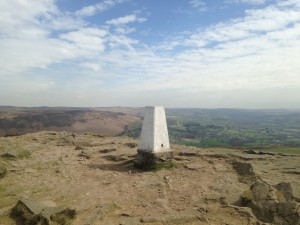 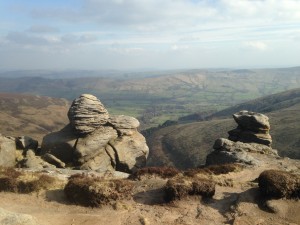 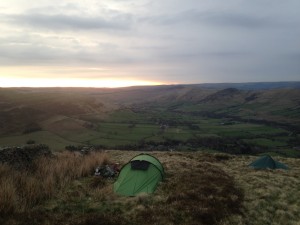 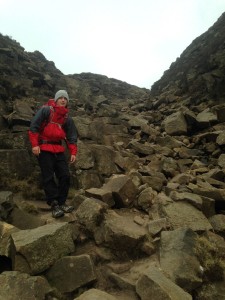 Sam and his family were on holiday in the UK from their home in the Carcassonne region of France. After a couple of days exploring the area around Hadrian’s Wall they had made it as far as the Peak District and Sam had decided he wanted some time to explore the more adventurous side of the area. He decided to leave his folks and younger brother in Tideswell and booked Come walk with me to take him on a wild camping overnighter on Kinder. We were treated to conditions more akin to those experienced in the South of France which led to a fantastic twenty four hours in the Dark Peak.
Leaving Hope we started the steady haul up Win Hill, passing through Twitchill Farm and climbing through the scrubby Heather towards the summit which, unusually, we had all to ourselves. Visibility was incredibly good and the view stretched over the reservoirs to Derwent Edge and beyond, the sky was blue, there were no clouds to be seen and it was all most un-Dark Peak like! We followed the ridge down to the Hope Cross boundary marker and then out across Crookstone Out Moor and up onto the plateau of Kinder itself. En route we saw Wheatear, Curlew, Lapwings, Kestrel, Buzzard and Grouse in addition to the spectacular views. Kinder itself was a little busier, but once we had passed Ringing Roger and hit the high path above Grindsbrook Clough we pretty much had the place to ourselves. We eventually made our way round as far as Grindslow Knoll and dropped down the far side to find a well sheltered camp spot with a view down over Edale. Chorizo stew and hot chocolate, good conversation and a clear sky occupied the rest of our evening.
After a chilly night, porridge is always a good start to the day! Fuelled by oats we crossed back over the Knoll and picked our way down the clough, which had precious little water running down the stream bed, into Edale. We picked up a few extra supplies and then undertook the steep slog up Harden Clough and round onto Mam Tor. I have written often about “the mother hill” but on a day such as this was with cloudless skies, a gentle breeze and impeccable visibility I challenge anyone to find a better spot! Sam certainly loved it and the history of the ancient fortress that once sat on top of the hill. We followed the Great Ridge which stretched out before us, up onto Back Tor and then Lose Hill, from the summit of which we could see our whole route. We stopped for lunch and then descended down the long, grassy slopes to Hope where we’d started out 24 hour earlier. En route back to Tideswell and Sam’s family we stopped at the Broken Road and watched three hang gliders making the most of the Mam Tor thermals, and then it was onwards to deliver a tired and happy client back to their family!