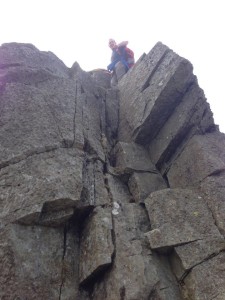 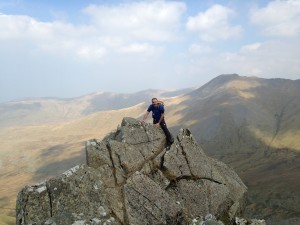 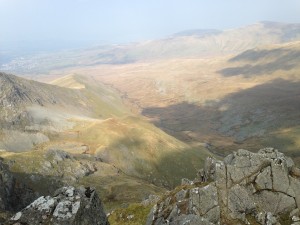 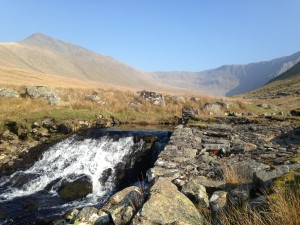 Gary had never been walking in Wales before and having climbed with him at the Manchester Climbing Centre over the last couple of years I decided his debut should be on a route that might enable us to do a little scrambling as part of the day. We were blessed with distinctly un-Welsh weather, sunshine and blue skies, as we left the village of Gerlan above Bethesda and made our way through sheep speckled farmland and along the Afon Llafan. The valley that opened up in front of us was truly spectacular with a real Tolkeinesque quality to it, on the left the long ridge from Yr Elen leading down to Foel Ganol, above us on the right the grassy slopes of Mynydd Du and in front of us the huge, imposing bulk of the Carneddau and the craggy, intimidating face of the Black Ladders. It was boggy underfoot as we followed the odd Wheatear along the path eventually stopping for a coffee at the foot of the Llech Ddu crag.
The next hour was spent going up. The sinews were first stiffened on the climb up to the hanging valley of Cwmglas Bach. Regular “view stops” looked out over some spectacular Welsh scenery and we eventually made our way onto the apex of the Llech Ddu crags from where it was time for some hands on rock action. The scramble was a series of glorious short rocky steps, none of it overly technical, with the odd bit of decent exposure but nothing too nerve racking. The great thing about it is that the route brings you pretty much out at the summit of Carnedd Dafydd, the third (or fourth if Crib Y Ddysgl is included) highest peak in Wales. It was on the summit we saw our first walkers of the day, the route up from the Ogwen valley proving more popular. Although it was hazy there were good views across to Tryfan and Y Garn, with even Snowdon showing itself in the distance. We followed the edge above the Black Ladders and then climbed again up onto Carnedd Llewelyn (second or third highest peak) named for Llewelyn ap Gruffudd, brother of Dafydd and one of the last warrior princes of Wales. We found a small patch of snow on the North Eastern summit and had a snack with Ravens overhead and views stretching for miles.
Yr Elen was our next and last substantial peak of the day. Some say the mountain was named for Llewelyn’s wife Eleanor de Montfort, whilst other suggestions include a corruption of the Welsh word for leech, perhaps a reference to the way it sticks to the side of the higher peak, either way it’s a lovely hill with views down to the tarn hidden in the depths of Ffynnon Caseg. The onwards ridge ran North West with some steep, knee crunching descents, but we dropped off Foel Ganol and crossed the surprisingly dry valley floor back to the river and retraced our steps home. Just before we reached the village we were engaged in conversation by a local farmer who was keen to tell us about the Carneddau ponies we had seen and the hardy Welsh mountain sheep he farmed on the rough ground we’d been out on all day.
I tried to tell Gary that the Welsh weather isn’t always as benign as we experienced on our adventure and that sometimes the honeypots of Wales can be a lot busier, but I think I’ve got him hooked and look forward to planning another expedition for him soon.