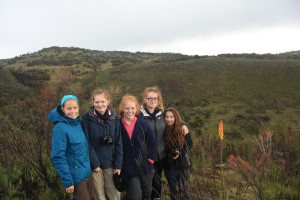 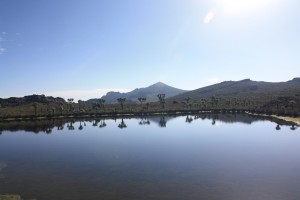 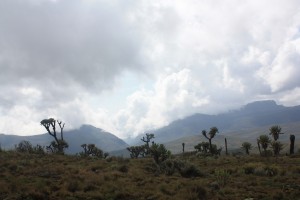 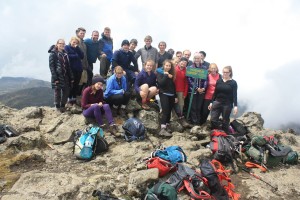 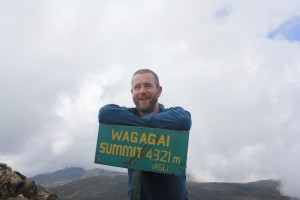 Full album from the trek

Mount Elgon National Park lies on the Kenya/Uganda border and is named for the extinct volcano that dominates the park itself. The caldera caused by the collapse of the volcanic cone is reckoned to be the world’s largest and creates an impressive feature viewable from the summit of Wagagi which at 4321m is the highest mountain in the park. The most commonly taken route from the Ugandan side of the border is the route that we took via Sasa River and Mude Cave camps. It’s a spectacular route that leads through farmland, jungle and heather country before emerging onto the edge of the caldera itself and following the rim all the way to the summit.  The group I was accompanying was from Kennet School and I was leading a month long expedition with Camps International that combined volunteering activities, this mountain trek and land and river safaris in Murchison Falls National Park.

We left the rutted, red earth high street of Bumasola followed by the curious stares of the local children and we were soon threading our way along narrow paths through shoulder high maize, crossing tumbling streams and climbing gradually through the farmland and hamlets of farmers. The views, even at this early stage, were jaw dropping and the landscape was incredibly verdant. Every inch of land was being used to grow maize, coffee, onion, peas, bananas, tomatoes and potatoes and there were goats, chickens, ducks and cows blocking our pathway at regular intervals. Our guides Chris and Alex led us at a good pace and with a few stops and starts we eventually made our way to the ladders at the magnificently named “Wall of Death”. In times gone by the only way to climb this part of the route was via frayed rope ladders, now, however, there are well maintained metal staircases that make the ascent of the cliff faces a far easier proposition. After a lunch of omlette and chips we pressed on into the rainforest and continued onto the first camp at Sasa River at a height of 2900m. En route we saw a couple of Monkeys (Colobus and Blue) hidden deep in the canopy and there was a plethora of birdlife and butterflies not to mention the fantastic trees, bamboo and jungle vines that fringed the pathway. Sasa River camp provided us with a huge sheltered hut, some very basic toilets and John, our excellent chef who knocked us up an impressive beef stew to sustain us. As I climbed into my tent on the first night it dawned on me that I was going to be camping in a bona fide African jungle, the fulfillment of a childhood dream and with the hooting of Monkeys and the birdsong it felt like something properly adventurous.

Day two up to the Mude cave camp was a shorter day but one that the group found tough going as the altitude began to affect individuals. We made our way out of the jungle area and into what is known as the “Heather zone”. The title gives the impression of a Peak District style moorland dotted with purple flowers but the Ugandan Heather is shoulder high and was interspersed with Red Hot Pokers and Giant Lobelias which gave the whole landscape a distinctly Jurassic quality. The views from the Mude Cave camp were spectacular looking down into a heavily forested valley and with clouds rolling in across the ridges…..We had a welcome campfire that evening as temperatures dipped down into single figures and I had to make the difficult decision to tell two of the party members that they were not going to be coming on the summit day with us. It’s never a pleasant discussion to have and it was the last thing that I wanted to do but for the safety of both the individual and the group it was something that had to be done and they accepted it very maturely and with good grace.

Summit day was an 18km round trip so after a couple of  bowls of porridge it was an early start. Ahead of us we could see both Mubiyi and Jackson’s Summit, the second and third highest peaks on the Ugandan side. We reached the spectacular mirror lake of Jackson’s Pool, like the summit named for Frederick Jackson wh0 in 1889 became the first European to climb Wagagi itself. The climb to the edge of the caldera was a steady one and from there we followed the ridgeline above the Kenyan border and finally made our way up above 4000m and up to the summit at the memorable height of 4321m. The feeling of getting all those who started the summit day to the top is the reason I do this job and the sense of achievement amongst the group was palpable. After taking in the views across the caldera into Kenya we started to descend back into the cloud, some of the group were starting to feel the altitude and distance so the sight of John, our chef, with his chapati and beans was a very welcome one! Buoyed up by this most Ugandan of lunches we made our way back to Mude Cave and after a couple of hours around the campfire everyone was enjoying a well deserved rest leaving me with the stars, the fire and the experience of feeling alone on the side of a Ugandan mountain.

The route back down followed the trail we had taken. The path down past Sasa River to the “Wall of Death” was fine but as we reached the ladders the heavens opened and the last couple of hours were spent slipping, slithering and sliding our way down through cornfields and villages back to Bumasola. The rains had already made the roads difficult and we ended up walking through the village to a spot where the minibus could turn around without getting bogged down.

Mount Elgon and Wagagi are a fantastic challenge with a the varied landscape, the magnificent scenery, the achievable goal and the support of the amazing guides and porters without whom we would have found the whole process considerably harder. The trek was one of the highlights of the whole month in Uganda and myself and Come walk with me are delighted that we were a part of it!